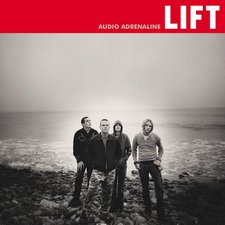 Every once in awhile a band writes a song that makes you wonder if they've been listening to the thoughts going on inside your head. With the first listen you can't help but wonder if it was written for you. Or maybe God knew that it was the only way to really get a point across to you. When Audio Adrenaline scribed the reflective rock song "Ocean Floor," guitarist Tyler Burkum admits they had no intentions of recording it. However, it may be the song that will have the greatest impact from the band's sixth studio album, Lift. "Ocean Floor" drives home the reality and strength of God's forgiveness. The chorus assures us, They're all behind you/ They'll never find you/ There on the ocean floor/ Your sins are forgotten/ They're on the bottom/ of the ocean floor. With the album's opener "You Still Amaze Me," a worship-filled pop/rocker about finding nothing more amazing on Earth than God Himself, it's evident what direction the quartet is taking. With Mark Stuart's rapidly aging vocals, brilliantly complimented and backed up by Tyler Burkum's soft melodies, the band has a more matured vocal style which is accompanied by a more matured sound overall. Lift musically has the rough feel of 1996's bloom, but also features funky upbeat pop tunes like "Beautiful" and "Rejoice," with small moments throughout the record that even remind me of "old school" Audio Adrenaline from the early nineties. For a band who's been around for about a decade now, their growth is noticeable and Lift is easily features the band's best work.

At one listen, it's easy to get the feeling the band was looking to record a more vertically-written, worshipful album. But the band claims that this wasn't in the game plan at all. They just wrote about what they were dealing with at the time and after being written in pieces, have nicely come together as what is offered on Lift. The heart-felt surrender in "This Is Everything" is reminiscent of "Hands and Feet" in message and pop/rock feel. Stuart's vocals are more passionate and thoughtful on this record, with Burkum's soft choruses crying out to God as in "This Is Everything" and the desperate plea, "Speak to Me." While album highlights are nearly each track, there are songs like "Ocean Floor" and "Tremble" that hit like a Mack Truck, although not necessarily in musical force, but more so lyrically and spiritually. "Tremble," which was recorded live in the band's house-turned-studio, opens with a chilling guitar and passionate vocals with emotional lyrics, creating a powerful worship song that is liable to have you on your knees before the Lord in reverence. This song is truly amazing.

"Glory" is an upbeat worship song about our desire to sing Glory to the Lord in complete exaltation. The song has such a power to it, you get the feeling you're at His feet worshipping Him with a great passion and praise. "Lift" is a classic pop/rock worship song about loving to lift the Lord up in praise. Knowing Audio A purchased their own house to convert into a homey studio to settle into explains the comfortable sound the band has produced here. The more matured sound feels comfortable for the band, and it's obvious they enjoyed making the music here, which is evident with the retro fun praise of "Beautiful."

Lift is a brilliant step for this pop/rock icon. Clearly the band's best record to date, Lift is a reflective and worshipful journey which couldn't have been done better by anyone other than Audio Adrenaline. And what else can I say? Lift is amazing.