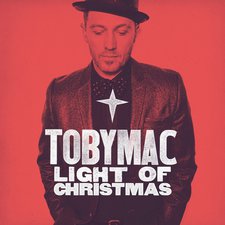 
One the most recognizable faces within the hip hop and pop rock community is TobyMac, so it seems only natural that he would have a Christmas compilation. TobyMac has actually released a Christmas EP in 2003, as well as a full-length album, Christmas in Diverse City, in 2011 for which he collaborated with other artists on half of the album. In addition to this, he recorded a single with Owl City for a VeggieTales Christmas episode.  Unlike many artists out there who do a traditional piano or orchestra release with the only distinguishing factor being the voice, TobyMac chooses to stay with his style of music. The listener might wonder, “Is this album a re-release because it looks all too familiar?”  To answer that question:  it is a rerelease that also contains some new tracks (and drops much of the Diverse City Band's tracks), much like an album's special edition release.

The album begins with “Bring on the Holidays”. This is very suitable icebreaker as it is energetic and engaging to the listener, with a definitive Christmas atmosphere spurred on by echoing bells.  If it wasn’t for the obvious Christmas theme of this song, it could have just as easily been a single on the latest TobyMac album. It provides an encouraging message: “I still believe in love /to celebrate our Savior’s birth/ we will pray for peace on earth”.  The next track (originally released as a single for VeggieTales’ Merry Larry and the True Light of Christmas) is “Light of Christmas” with Owl City. It has that typical electronic feel that we’ve become accustomed to with all of Owl City's songs, such as “When can I see You Again” from the movie, Wreck-it-Ralph.  It always makes songs all the more interesting when artists combine their talents like the next, all-new song, “Can't Wait for Christmas” with Relient K.  Having previously released an exceptional Christmas album, Let It Snow Baby...Let It Reindeer, it’s a welcome addition to have them join in with TobyMac. “Can’t Wait for Christmas” works really well, with Matt Hoopes and Matt Thiessen’s vocals in the background as well as joining in the chorus.

Jamie Grace fans should be pleased with her and TobyMac’s rendition of “Mary's Boy Child,” with her acoustic talents adding to this sincere, relaxed rendition. A remixed version of “Little Drummer Boy” is provided on this release, and it’s filled with a little more variety in sequence. This version is a little over 30 seconds shorter than the original “Little Drummer” from TobyMac’s  Christmas in Diverse City. “Christmas This Year” is a nice original song, featuring Sixpence None the Richer’s lead singer, Leigh Nash, who is known for singing the classic, “Kiss Me”. If one Owl City contribution was not enough, then you will be delighted to know that this album offers another with “The First Noel,” as well as a remixed version of this song never before released. Hearing this song so many times by different artists every year, it’s nice to hear a version with a different cadence containing some mixed pop and soul. “This Christmas (Father Of The Fatherless)” and “Come Let Us Adore Him” complete the album as noteworthy songs with the remixed track.

Although most of these songs have already been released in other presentations, it's still a great Christmas album to add to a collection to play during the holidays around the fireplace (if you have one) or going for a routine outing. For those that have previously purchased Christmas in Diverse City, you would probably do better to download the songs or remixes that you don’t already have in your library if it’s an option. If you’ve never had any Christmas album from TobyMac, this is the one to get as it is the most complete album, containing 2 additional songs and 2 remixed tracks.

In 2011, TobyMac released Christmas in Diverse City, which featured six tracks from TobyMac and seven tracks from his Diverse City band. Now, six years later, this album is being repackaged as Light of Christmas, dropping the underwhelming Diverse City tracks and adding a few new ones (most notably a collaboration with Relient K). Light of Christmas is a superior album to its predecessor, so if you are looking for fun and eclectic Christmas tunes, look no further. - 11/6/17, Christopher Smith of Jesusfreakhideout.com