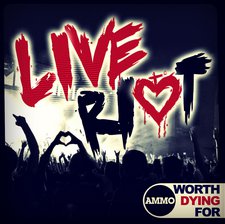 Worth Dying For
Live Riot

For those who aren't familiar with Worth Dying For, they are rock worship band that's been making pretty good albums independently for some time now. For those who do know who they are, this is not simply your ordinary live album as the title suggests. The release is completely live and about half of the tracks will be familiar to your ears, but there are also a slew of unreleased tracks included. It's definitely going to be a treat for fans of edgy worship or of WDF.

Specifically speaking, this album was recorded at the Ammunition Conference in Modesto, California which is held each year to give youth and youth pastors the necessary tools to be effective in this world. The album opens with a very powerful spoken intro about the amazing God that we serve and the victory He has won for us. What follows is a live ensemble mix of last year's Love Riot and ten new WDF standard worship music tracks. There is plenty of techno/industrial filled worship with just enough edge to it to make it more appealing than your typical contemporary worship music. And while you can tell that this is a live recording, the production cleans up the sound and the overall product is quite good.

As far as the song selection goes, WDF pretty much hit the nail on the head. Standout tracks such as "Closer," "Higher," and "Savior" from their previous release are all great songs and the new music additions are solid worship offerings (despite often bearing the genre's signature style and song structure). Each song is filled with great lyrical content such as "I'm taking back what the enemy's stolen from me" from "Taking Back" or "Saturate us in your presence, send your glory down" from "Send Your Glory Down." I can appreciate that half of the songs are unreleased and every song is powerful worship, singing of how great of a God we serve. To throw out a new album after last year's successful Love Riot is an admirable feat, and while this project doesn't offer a whole lot to break the stylistic mold of the genre, this is definitely going to be a favorite of worshippers all over.