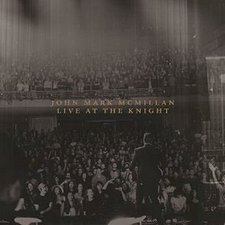 After returning to the independent circuit for his fan-funded album, Borderland, and an EP with his wife Sarah, singer/songwriter John Mark McMillan has once again teamed up with a record label (Sparrow/Capitol CMG), as well as Jesus Culture's group of musicians, to bring us his very first live album. Recorded this past May in Charlotte, North Carolina at The Knight Theater, Live at the Knight captures the musician's artistry and what sounds like an intimate night of fellowship and worship.

I'm not really sure what most people look for in live albums, but for me, I want something that not only sounds good and professionally-recorded, but also captures the "live concert" feel. I've come across live albums where the name of the game was recording the songs and including as little that fell in between as possible. No interaction with the crowd, no banter, just song after song; I want to hear that stuff. I want to know what it's like to see an artist in concert. John Mark McMillan and friends really deliver that on Live at the Knight. Not only do the songs sound wonderful, like "Borderland" and the worshipful "King of My Heart," led by Sarah, but you can really tell that McMillan cares about his audience and is interested in fellowship as well as worship. After "Borderland," for example, he talks about the great things in life, and symbolically invites the crowd into fellowship with him as he jumps into the Springsteen-esque "Love at the End."

McMillan picked a stellar list of songs from his discography, even from The Song Inside The Sound of Breaking Down, if you count "How He Loves." As mentioned earlier, he even hands the microphone to his wife for "King of My Heart" and "Glorious Things," both from this year's EP You Are The Avalanche. "Death In His Grave" and "Carbon Ribs" are two of my favorite tracks here; the former is loud and triumphant as the band and crowd collectively praise Jesus for conquering death, the latter is soft and subdued, quietly basking in His glory. "Carbon Ribs" even seamlessly transitions into "Nothing But The Blood," and it's perfect. Jesus Culture's Bryan Torwalt joins in "Death In His Grave," while his wife and singing companion Katie Torwalt comes in later for "Heart Runs." As Live at the Knight is technically also released under the Jesus Culture name, it's not surprising to hear the ministry's artists joining in here. In fact, Kim Walker-Smith also joins in for a couple of songs, "Future / Past" and "How He Loves." Though I'm no Jesus Culture fan, the Torwalts and Walker-Smith do add a nice, extra layer of vocals, and Walker-Smith's verse on "How He Loves" sounds good in context.

Live at the Knight is John Mark McMillan's first-ever live album, and he, his band, and the sound crew all nailed it. I've enjoyed listening to this album multiple times, as it's breathed new life into these songs for me. All John Mark McMillan fans should at least own a copy of the album, but it might be more worthwhile to get the full set with the DVD and bonus content. I don't think I've enjoyed a live album this much since The O.C. Supertones' Live, Vol. 1. Highly recommended.