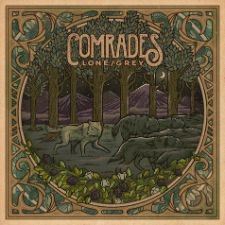 
It is very rare I am captivated by an album upon first listen. Even with artists I have come to enjoy the most, the best seem to take time to sink in before they can be fully appreciated. Comrades' Lone/Grey is a different story. Receiving this release before its street date felt like being let in on a well-kept secret, and, in a way, it was. The Virginia-based three piece are an enigma. For a band that has nearly a decade of experience, they display a lean discography to say the least, with 2014's instrumental Safekeeper being the only other full-length of which to speak. Admittedly, that album is technically sound, even impressive at times, but it does not adequately suggest where they currently stand. To be certain, Comrades has spent the last eight years preparing to take center stage and they are more than ready now.

Above all, Lone/Grey is a complete work. To examine each track for its own merit would feel out of context and undoubtedly compromise its essence, which many would argue is the mark of a truly great album. That being said, the space between "Synchronous" and "Shepherd's Hymn" is one of the more striking moments on the release, a place where melody becomes the centerpiece and the album breathes. "That We May One Day Be The Same" is also notable, combining many of the best elements from the prior tracks into a worthy conclusion. Somehow, the album's progression suggests a topography not unlike natural landscapes, with intentional peaks and valleys that ensure synergy between its distinctions and make the whole much greater than the sum of its parts.

Judging from prior works, Comrades have traded technical proficiency for emotional conveyance, a point likely best represented by the introduction of vocals. Unlike many modern artists, the voices of the musicians are not meant to add immediacy. Instead, they function as another instrument, challenging the listener to engage in the entirety of the piece rather than shirk towards a familiar sound. And while within Lone/Grey there still lies the same dichotomies of tune and noise, singing and screaming, silence and sound, they are pieced together in a manner that is both whole and new. In this way, Comrades accomplish something extraordinary.

In short, Lone/Grey is a testament to Comrade's maturation, a career igniting effort, and quite possibly the best post-hardcore album of 2016.

Female vocals are a rare thing in the realm of American heavy music, but even rarer still is a band that actually has a female singer complement a male screamer in such a fashion as Comrades does. Indeed, they are the first band I've heard that does so. But what makes it work is a fantastic cooperation between many similar opposites; the light and the heavy, the ambient and the brutal, the melody and the dissonance. Indeed, Comrades' Facedown debut, Lone/Grey, is like a case study of complementation, leading to a captivating-yet-nuanced listen that one doesn't need to be a fan of in order to appreciate. The individual musical approaches that make up the opposing aspects of Lone/Grey aren't exactly themselves totally original (most have heard indie rock bands that sound like "Synchronous," or metalcore bands that sound like "Dark Tongues Part II"), but to combine them with as good results as this takes skill. - 10/8/16, Mark Rice of Jesusfreakhideout.com

After one studio album with the independently-run hardcore label Blood & Ink Records, indie rock/post hardcore band Comrades has joined the Facedown Records family for Lone/Grey. Comrades furthers Facedown's recent stretching of their genre preferences by offering an album that fits well with current labelmates My Epic and Attalus; however, their indie rock, led by Laura McElroy's soothing voice, is oftentimes overshadowed by Joe McElroy's powerful screams and the massive guitar riffs. You get this from the start, as "In the Whisper, In the Gate" starts with a softer guitar melody, and Laura's wonderful, Eisley-esque vocalizing, but Joe soon comes in to steal the show. Interestingly, some of the heavier portions remind me of more recent Norma Jean, such as "Dark Tongues, Part II" and "Brother(less)." As you can imagine, Lone/Grey is a bit of an unpredictable album - you just don't know what to expect. With this in mind, it's more ideal for listeners who don't find dramatic shifts in intensity to be too jarring to enjoy. With multiple listens to my defense, I believe Comrades is leading the race for the best new artist to hit the national scene. - 10/9/16, Scott Fryberger of Jesusfreakhideout.com