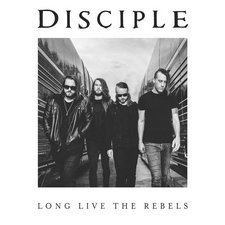 
When a band has a discography as extensive as Disciple, it can be easy to get comfortable making the same old material. It might satisfy fans for a while, but if you don't change, over time you'll start to appear out of touch and irrelevant to potential new fans. On the other hand, if you change too much, you might lose your most loyal fans and risk compromising the band's identity. 24 years since their original formation and 21 years from their debut, Disciple has proven that they know how to put out relevant material while staying true to themselves. This was especially true two years ago when they independently released Attack, displaying a rekindled vision for making spiritually bold rock music while paying nostalgic nods back to their pre-Fair Trade label years. A couple tracks from Attack--"The Name" and "Radical"--were even some of the best songs the band has ever recorded, which is no small feat when you have over 165 tracks in your back catalog.

It was only three months ago that Disciple announced that they would be teaming up with veteran producer Aaron Sprinkle to independently release their 12th full-length studio album. After another successful Kickstarter campaign, the band has partnered with Tooth & Nail (for the first time) to release the aptly titled Long Live The Rebels. For Disciple, Long Live The Rebels is a statement of perseverance and longevity, and in a more spiritual sense, a Christian's eternal life in union with Christ. It declares that, despite adversity faced both in spiritual warfare and in their music career, they have risen victorious because of strength they have in Jesus.

On initial listens, Long Live The Rebels does not leave as strong of an immediate impression as Attack. It's not that they've dialed down the heaviness; in fact, as a whole, this is a bit heavier than Attack. Rather, this album is more a mature effort, and thankfully, because of that, it is more of a "grower." Take the opening track, "First Love," as an example. With heavyweights "I Just Know," "Regime Change," and "Radical" leading off their respective albums with career highlights, "First Love" doesn't have that same "wow factor." Opening the album on a more personal note, "First Love" serves as a plea to Jesus to "take me back" after living a life of hypocrisy. It boasts a memorable chorus, a fantastic breakdown, and has that inexplicable quality that makes its five minute runtime feel much shorter than it actually is.

Throughout the album, there is stellar guitar work by Andrew Stanton and Josiah Prince, and impressive drumming prowess by Joey West. Several moments really highlight the chemistry of this lineup, such as the driving verses of "Secret Weapon" and the ferocious bridge of "Forever Starts Today." The band has yet to bring on a replacement bassist for Jason Wilkes, so the bass guitar for this album is played by Andrew, Josiah, ex-Relient K member Ethan Luck, The Wedding's Cody Drigger, and ex-Philmont member Matt Arcaini. Kevin's commanding vocals are as confident and intense as ever; seamlessly transitioning between singing and screaming, continuing to prove he is one of the most gripping vocalists in the industry. Older fans will appreciate the bridge of "Spirit Fire," which features the higher pitched screams from Kevin overlapping his more guttural screams, an approach often employed on Back Again. Continuing the trend started by Attack, Kevin isn't the only one to lay down vocals for this album. Guitarist Josiah Prince has a few moments to sing, most prominently on the first verse of "Erase" and both verses of "Come My Way," and Joyce Martin Sanders of The Martins provides guest backing vocals for the last minute of "Empty Grave" that complements Kevin nicely.

While not necessarily career highlights, "Forever Starts Today" and "Spinning" are two of the best tracks on the album, taking a bigger picture perspective that add to the album's more mature outlook. "Forever Starts Today" may have a title that instantly reminds you of Pillar's "Forever Starts Now," but the lyrics are more specific than its slightly generic title implies. In the song, Kevin tells a story of a close friend coming to Christ after a long time of waiting and praying for the spirit of God to work in his life. This case study of sharing the Gospel gently challenges listeners about the eternal significance our words have for the people we care about while also reminding us that that saving power comes from God alone. "Spinning," the second to last song on the record, hearkens back to the dichotomous lyrical structure of 2007's "Love Hate (On And On)," outlining the brokenness and greatness found in humanity: "the blood of thousands spilled / the greatest nations built / and the world keeps spinning around."

Among the selection of upbeat and relatively aggressive hard rock tunes stands one cryptic mid-tempo rocker, "Come My Way." It's a spine-tingling monster of a song that packs a powerful punch. Listen closely to Kevin's screams or you might miss the intriguing lyric, "can you feel my fingertips on the chalkboard of your soul." While one of this album's major strengths is being solid from top to bottom, there is one song that feels a bit out of place: the uber radio-friendly "God Is With Us." But even still, "God Is With Us" is surprisingly likeable, boasting one of the catchiest hooks on the album, "their words cannot stand against us / for God is with us." It's a straightforward lyric and almost cringe-worthy that they use "us" to rhyme "us," but it's hard not to sing along.

Long Live The Rebels contains traces of Disciple's previous records, perhaps most notably Scars Remain, but like most other Disciple albums, it does have its own identity as a record. The biggest factors to this include Josiah's vocals, Aaron Sprinkle as producer, the mature perspective, and the inclusion of some well placed electronic elements. Overall, Long Live The Rebels is a thoughtful rock album that is more rewarding with repeated listens. If it doesn't grab your attention right away, give it a few more spins--otherwise you might be missing out on one of the strongest rock albums to come out in 2016.

Kevin Young is a pretty impressive guy. His band Disciple, despite several lineup changes throughout the years, continues to release excellent hard rock music. Is the music new or innovative? Not really. Is it super tight and enjoyable ear candy? Most definitely! Long Live the Rebels continues the trend of really solid music coming from the Disciple camp. Being an indie band is quite obviously where the group thrives. Disciple offers everything from hard rocking head bangers like "Secret Weapon," the metal tinged musings like "Underdog Fight Song," to nice ballads like "God is With Us." Long Live the Rebels is a really nice mix of songs that grow the theme of being a "radical" from the previous album into being an all-out rebel. If you're looking for a good starting place to introduce yourself to the new album without just diving in headfirst, I strongly recommend "Come My Way." - 10/13/16, Michael Weaver of Jesusfreakhideout.com

As cliche as the phrase may be, longstanding hard rock act Disciple seems to have done no wrong throughout their extensive career. Weak moments rear up occasionally, of course, but blemishes have been few and far between. Long Live the Rebels, the band's 13th studio release, may not shake up the established sound too much, but it finds the band as confident in their craft as ever. There are moments that possess an epic aesthetic that pushes these songs above the norm, allowing them to dominate every second they are alive. "Come My Way" is the perfect example of this, featuring a brooding guitar line and commanding percussion. Further highlights include the title track, the power ballad "Erase," and the worshipful "Spirit Fire." Love Live the Rebels is an excellent example of a band that refuses to conform to mediocrity. - 10/18/16, Lucas Munachen of Jesusfreakhideout.com

The strengths of Disciple have always seemed like they would mesh perfectly with the strengths of Aaron Sprinkle, but it took twenty-four years and thirteen albums before they finally chose to partner with him. But that wait has paid off with Long Live The Rebels. It's hard to argue that this album is the best Disciple, or Sprinkle-produced, album ever made, but what it is is an album with virtually no flaws (and certainly no glaring flaws) that sounds just like one would hope an album coming from this duo would sound like. While Long Live The Rebels is undeniably classic Disciple, some of the most memorable moments on the album are those where Sprinkle leaves his mark on the production end, such as the punkish "Erase" and "Spinning," the Demon Hunter-esque "Black Hole," or the pulsating epic "Come My Way." It makes me wonder (and wish for) what Disciple may have sounded like in their Fair Trade years with Sprinkle at the helm (especially since most songs seem to hearken back to that era of Disciple's catalogue). I'd find it hard to believe if anyone who loves Disciple or Sprinkle doesn't find themselves a true fan of this album. - 10/20/16, Mark Rice of Jesusfreakhideout.com