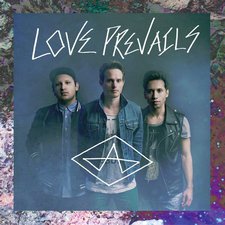 Shifting artistic direction is never a trivial matter. That said, the change can be particularly difficult for successful major-label performers feeling pressure from fans and industry types alike to simply keep repeating whatever formula it was that vaulted them to their lofty perch in the first place. Every so often, however, a given band's decision to go against the grain pays off in ways that few could have expected. Such was certainly the case in 2011, when Abandon singer/front man Josh Engler and his companions unleashed their second full-length project. Trading the earnest U2-by-way-of-the-Killers anthems that permeated 2009's Searchlights for a decidedly more funk-infused approach, the supremely engaging Control was, against anyone's reasonable expectation, an absolute masterwork - proving, once and for all, that a simple pop song could inspire you to ponder the universe and shake your body at the same time.

The intervening three and a half years since then - a veritable lifetime in the music business - have given Abandon devotees plenty of time to ruminate over just what path the intrepid San Antonio outfit would take in the wake of such a landmark effort. Those who spent the majority of their time since 2011 secretly wishing (and perhaps rightly so) the band would record an album's worth of tracks like "Talk to Me" and "Feel It in Your Heart" will be relieved to know that the new release is anything but skimpy when it comes to that which is dance-floor friendly. Even more encouragingly, the fact that the group has seemingly traded its previous Maroon 5/Hot Chelle Rae infatuation for a sort of disco-meets-early-'80s-synth-pop approach has done nothing to harm the innate quality of the band's material itself, as irresistible rhythm-heavy entries like "Messenger" and "Hope is Alive" so brilliantly prove.

Of course, from the beginning, the band's stock in trade has always been its melodic modern pop/rock offerings. To that end, the terse pacing and simple, repeated phrasing of the chorus of the excellent alt-pop piece, "Better" ("I'm better when I'm/ With You/ When I'm/ With you/ When I'm/ With you/ When I, I"), work as a perfect mnemonic device to lodge the cut firmly into the listener's long-term memory. Likewise, the consummately subdued "While We're Living," which wouldn't have been at all out of place on U2's All That You Can't Leave Behind, offers the ideal vehicle for a true appreciation of the vocal poignancy, clarity and weight of Justin Engler, who stepped up to the mic in the wake of his brother, Josh's, departure in 2012. Indeed, when the intrepid singer closes the proceedings with exhortations to "Close your eyes/Listen to the music/ And just start to dance" on the loping modern rock/dance-pop hybrid, "Heaven," only the hardest-hearted listener will be able to resist the command.

As impressive as Control's pop and dance numbers were, it was on bracing, straight-ahead rock pieces where the band made its point most convincingly. To be sure, harder-edged songs such as "Help," "S.O.S." and "Push It Away," which were far catchier and more fully-formed than anything on Searchlights, pointed to a group whose new-found flirtation with the groove was anything but an indication that they'd gone soft. Unfortunately, that sort of energizing, no-holds-barred material is all but absent on the latest release. In its place are generic custom-fit-for-radio pop/worship entries like "You Were There" and the likewise anemic leadoff single, "It Was Love," neither of which leave any sort of lasting impression once they've finished playing. In fact, the only track on Love Prevails that could be considered even moderately rocking is "Warrior" - a cut whose leaden beat and less than unique lyrical sentiment unfortunately render it likewise disposable.

To their credit, Engler & Co. hit the mark far more often than they miss it this time out. And the fact that their most recent work was crafted in the wake of the departure of Josh Engler, who was, for many, the very heart and soul of the band, simply renders it that much more admirable. In fact, truth be told, once listeners are over just how much Justin sounds like his brother, many of them may well find that his vocals are even clearer and more piercing than those of the former front man; a comparison which speaks volumes to the enormous talent of both siblings. In the end analysis, Love Prevails doesn't quite ascend to the same rocking, quirky, funk-filled heights as its predecessor. Taken on its own merit, though, or even as a sort of more subdued Sunday morning counterpart to the rollicking Saturday night vibe of Control, it comes across as both a moral and stylistic victory for its talented and tenacious creators.

It is ironic that, after trading lead singer Josh Engler for his brother Justin, the vocals on Love Prevails are what preserve Abandon's sound best. First and foremost, this album displays a regression in songwriting. While the album is saturated with the noble message of sharing the love of Jesus, it is oftentimes delivered in a forced and cheesy fashion. Sonically, many of these tracks pack a lot of energy with peppy guitar riffs, cheerful synthesizers, and catchy choruses, but they don't think outside the box, lending to a relatively generic and predictable sound.

On a more positive note, there are a few songs that are really enjoyable. Abandon's lead single, "It Was Love," presents a simple gospel message wrapped in a quietly epic pop/rock atmosphere. The anthemic "Warrior" takes a stab at something completely new for the band as it is driven by a retro synth that is reminiscent of something from a NES console. The pop/dance track "Better" features an irresistible chorus that is fun to bob your head and sing along to. These few tracks may rise above their formulaic counterparts, but they are ultimately not strong enough to carry the rest.

What we have here is a collection of decent pop songs. There is little to dislike, but in a music industry that is over-flooded with new talent, Love Prevails doesn't do much to stand out. Some of the stronger cuts off this album might get some airtime on Christian radio, but any hype for this album will likely be short lived. It is sad to see Abandon take a step backwards from their stellar Control. Perhaps more time adjusting to these new band dynamics will find them back at the top of their game. - Review date: 11/2/14, Christopher Smith of Jesusfreakhideout.com