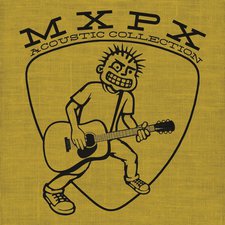 MxPx has been around a staggering 22 years at this point. In a time where bands are breaking up constantly, these Bremerton icons manage to stay afloat. While Tom and Yuri have retired from touring, the guys refuse to die. One of the reasons for MxPx's ongoing run is their avid fan base (both in the Christian and secular markets), but even more so is their ability to please said fans. MxPx has always worked hard to give their fans a little extra and on July 6th, 2014 (their anniversary as a band) they gave their fans what they've been begging for for years: an Acoustic Collection. Mike Herrera and company have reworked, re-arranged, and re-imagined 12 cuts from the band's storied career to pure acoustic goodness. The tracks are taken from the studio albums Teenage Politics, Life in General, Slowly Going the Way of the Buffalo, The Ever Passing Moment, Secret Weapon, and Plans Within Plans. Some tracks are stripped completely down to barebones with guitar and vocals only, while others feature a full band. Either way, these are sure to please fans far and wide.

The record opens with an unexpected acoustic version of the Life in General favorite "Doing Time." These are songs that Herrera does acoustically live, but unless you've seen a show, this one could be a surprise. There is nothing mind-blowing about this rendition, but it is a nice start. My long-time, personal favorite MxPx song is up next in "Tomorrow's Another Day," and it's the first of three numbers to feature Agent M's vocal talents. Agent M sings in harmony with Herrera and overall it's a great take on the classic. The album having the most songs represented is Secret Weapon and the first track from that album is one of the best in "You're On Fire." The tempo is slowed dramatically and Tom's once fast-picked guitar is changed into a soft acoustic beauty. Let it Happen was released in 1998 as a B-sides and rarities album, but the title track found its way into the spotlight as a fan, and apparently band, favorite. The acoustic version of "Let it Happen" was the first piece of ear candy released for fans to hear from this release. It's not one of the strongest in the bunch, but it remains an enjoyable listen nonetheless. Secret Weapon shows up again in a big way with the outstanding "Never Better Than Now." The blistering original is stripped down to an acoustic only triumph. "My Mom Still Cleans My Room" is the final track from 1996's Life in General and translates a bit better than its counterpart.

"Secret Weapon" is up next and finds Agent M harmonizing with Herrera yet again in this acoustic version that sounds very similar to the work Herrera does in his alt/country side project Tumbledown. "Drowning" was a song that many people seemed to look past in 2007, but 7 years later, its acoustic version demands to be respected. One of Secret Weapon's bottom end tracks has become one of Acoustic Collection's shining stars. "Buildings Tumble" is the only showing from 2000's The Ever Passing Moment. This version sounds very similar to the original as not much was done differently from a musical standpoint. The track also marks Agent M's third, and final, appearance. "Aces Up" is not the track I would've picked from the group's latest album, but it works. This song also has a slight Tumbledown vibe. After 10 really solid tracks, MxPx saves the best for last. Sort of "For Always," for my personal tastes, is hands down the best track present in this collection. This rendition is also completely stripped to just vocals and acoustic guitar. While it's not glaringly different from the original, this interpretation just seems to hit home. As with any MxPx show, there is always an encore. The MxPx anthem and theme song "Punk Rawk Show" is the final track. It's always been a fun song, and I love hearing Tom sing the background, but, on this album, it finishes towards the bottom of the barrel.

MxPx have not only answered fan's requests, but have done so in astonishing fashion. Some groups may release an acoustic EP, but very few go into the studio to record a full acoustic album. While not every song scores big, most of MxPx's Acoustic Collection feels like it was written on and for acoustic guitar. If you played the record for a person who didn't know about MxPx, it's doubtful they would be able to guess they were a punk band. The arrangements Mike Herrera put together here work well and lend themselves so nicely to the acoustic guitar. Perhaps I'm waxing too poetic about this album; perhaps I'm too big of a fan boy to find greater flaws in the art. These things I will admit, but I think any other fan will be right there beside me. If you haven't been a fan of MxPx in the past, this could be a really great way to get to know their material in a different way. As a fan of this band for nearly 20 years of my life, this could be their best release since Slowly Going the Way of the Buffalo in 1998. This is likely to go down as my favorite album of the summer and has been in constant rotation. Die-hards will also be happy to know that the boys also released a demo album, simply titled Demos Collection, Vol. 1, on the same day. Happy listening.