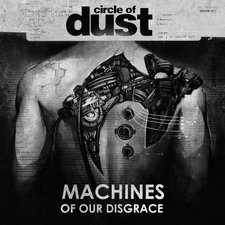 Circle of Dust
Machines of Our Disgrace

The artist simply known as Klayton has been a very busy man over the years. Fronting projects such Circle of Dust, Argyle Park, AP2, Celldweller, and Scandroid have made him a rather prolific artist. While Celldweller has been his most successful act, Circle of Dust was quite popular in the Christian music scene in the 90's. CoD spent the majority of their time in the Christian market on the now defunct R.E.X. Records, but their final album, Disengage, was released on Flying Tart Records (now under Light Records as a part of eOne Music). Recently, Klayton was able to get ahold of his back catalogue and released remastered versions of all of the CoD (as well as Argyle Park's debut) albums. This announcement came with the promise of the first Circle of Dust album in 18 years. While the entire band isn't back together, Klayton has decided to release music under the Circle of Dust moniker yet again. Machines of Our Disgrace is decidedly not a Christian market release, and Klayton has explained that CoD is not a "Christian band," but due to the band's history with the Christian market, we wanted to examine this one for the fan base that is still around.

With Klayton, the name of the game is industrial rock/metal -- and man, is he good! The opening track is fittingly called "Re-Engage" and is just a short intro to build into the title track. As expected from Klayton, "Machines of Our Disgrace" starts off with sampled science fiction sound clips (which the theme continues throughout the album's entirety). After the spoken word clips, the guitar kicks in with an excellent riff -- complete with more sci-fi sound effects in the background. The album's title track winds up being an excellent reintroduction to Circle of Dust, however, one of the best follows in "Contagion." The driving rock/metal guitars continue to grind while heavier industrial and electronic elements begin to be introduced. Both of the opening tracks seem to question man's relationship with, and dependence on, technology. "Contagion," in particular, calls this out with the voice samples as the song starts with, "Well, I say the less we have to do with fancy things we don't need the better," and later, "We don't have to buy anything they make do we?" Klayton himself refers to technology as the disease/contagion and calls it the "gods" of today as he sings, "Willing transmission of disease; worship new deities. Contagion!" "Embracing Entropy" keeps a similar theme going, as Klayton questions what the world is coming to as it continues its decline into chaos and disorder. The chorus is more melodic and brings the thought into the forefront: "I can't make up my mind when it's made up for me. My system's in decline embracing entropy. The ground has given way to its stability. So long solid foundation and hello dear anarchy. Impossible to control; impossible to see. So we heed the call into the fall; one and all embracing entropy." The theme of chaos and anarchy continues into the most metal number on the album, "Humanarchy." The heaviest track on the album leads into the short thirty second interlude of "Signal." "alt_Human" starts off pretty chill, before breaking into the faster paced industrial rock song it is. Klayton continues to explore technology, but here he gets more into bioengineering, genetic modifications, and the subject of biohacking. The sound clips ponder, "There's going to be a lot of expansion done through interfacing the human brain with technology." There's an unanswered question of how far can you go and still be human? Klayton calls further attention to this issue as he sings, "Designer children; choose intelligence and sex all without knowing the long-term effects," among other lines about man playing god with this line of technology. "Hive Mind" follows in a similar vein as "Humanarchy" and talks about being deceived into letting others make decisions for you; no matter how vague or morally absent they may be. The song points out the dangers of the hive mind mentality.

After this, the album takes a slight turn. Most of the remaining songs ("Neurachem" being the exception) move away from the technology and bio-technology aspects. "Outside In" is one of the softest songs present and features a heavy electronic beat that pulses and pushes it along, as well as a nicely placed acoustic guitar in the second half. The lyrics are personal and contemplative. Klayton sings, "Sometimes I feel I'm on the outside looking in. It's like I'm watching someone else living in my skin. Hope has stained my heart in vein; I'm drowning in my sin." Later, he sings the most spiritual and poignant lyrics on the entire record, "Father, have mercy on your son and always bring me home again however far I've run. Father, grant wisdom from within so I no longer have to be on the outside looking in." The track clearly stands out from the rest and is an excellent addition. "Neurachem" picks up where "alt_Human" left off and takes the bio-modification platform further. The song flat out jams and is one of the most fun listens on the album. "k_OS" (pronounced chaos) in an industrial "instrumental" full of samples and different electronic elements, with the line, "Remember lies can't keep you alive, doctor, but I can" continually repeating. "Neophyte" jumps into full science fiction mode with samples referencing an alien abduction. The track is an industrial track, but mixes in some EDM influence with electric guitars coming in a little heavier at the end. The closer, "Malacandra," (taken from C.S. Lewis' Space Trilogy, starting with Out of the Slient Planet) is a six-minute-long instrumental featuring light guitars, electronic sounds, and ambience. It's truly a nice, soothing closer, given the heavier lyrical material to digest from earlier in the album.

It's been a long 18 years since Circle of Dust has graced us with some new music. Thankfully, Klayton's return to the Circle of Dust brand has given us something truly worthwhile. The lyrics and messages are deep and thought-provoking. The scariest question to ponder may be, "Is the album science fiction, or science fact?" The answer is very likely a bit of both, but it should cause listeners to really sit and think about the direction humanity is heading with technology leading the advance. Great industrial rock/metal numbers, like "Contagion," "Humanarchy," and "Neurachem," really push the album into greatness, but other industrial cuts like "Embracing Entropy," "Hive Mind," as well as the softer and reflective "Outside In," really highlight the highs and set the album off perfectly. Klayton's return to Circle of Dust is nothing short of a success. The argument could be made that this is the best Circle of Dust release to date; one could even argue that this is the height of all of Klayton's accomplishments. As mentioned before, this is not a Christian market release, but the album is safe for all ears. The content gets a little deep at times, but nothing more. If you enjoyed Circle of Dust back in the 90's, or love industrial rock and metal, look no further than Machines of Our Disgrace.