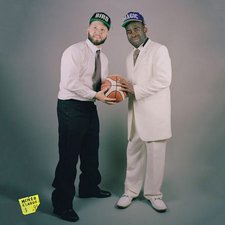 
Two of the best rap tunes over the past few years just happen to be a collaborative effort by Andy Mineo and Wordsplayed. If you have been under a rock and haven't checked out "Martinelli's" and "Lay Up," then now is the time, my friend. Mineo is quickly climbing the ranks on everyone's Favorite Rappers list, while Wordsplayed should be on everyone's radar as he spits with bass-sounding rhymes that are superb. The duo's first project, Magic & Bird, is a basketball-themed mixtape which is being released by Reach Records. "High Five" opens the mixtape with something similar to the classic Nintendo favorite NBA Jam and primes us for some basketball. Next, "Kidz" comes on with a great introduction to what this release is all about: hot beats, rhyming at its best, and rap tunes worthy to be played anytime, anywhere.

"Dunk Contest (Magic Bird)" comes along next and is jam-packed with basketball one-liners. "360 in the contract," "West Westbrook on an isolation," "if he's passing me the rock, you might not get it back," and "I just threw it off the backboard" give fans of the game reasons to love this track. "Say Less" comes along next and is so simplistic yet straight-fire that I can see myself bumping this for years. I'm never a fan of skits, but it is fairly common among hip hop joints and the two here offer some light humor and aren't bad at all.

About a year ago, Mineo dropped a track titled "The Upside Down," and "R.U.T.S." is an updated version with Wordsplayed assisting to make a more complete song. It turns out to be a head noddin' and dance-worthy track that is begging to be played at your next house party. "Judo" is super slow and bass driven with clever lyrics such as "I'm cursed with swag" by Andy and "I'm first, I'm last, it's Saint John at last" by Wordsplayed. The combination of those thumping beats and a chant-worthy hook make this track a slam-dunk. "Dance (You See It)" reminds believers to keep putting in the work, while "Team" creatively delivers a nice reggae infused sound. "Legend" offers some more light humor while also carrying stellar beats as Mineo and Wordsplayed end this mixtape with the same level of goodness that they began it with.

If the goal was to make a thirty-minute playlist that you could crank the volume on, have fun, and play basketball to, then success was definitely found here. This short mixtape is full of hot beats (GAWVI and BEAM wonderfully handled the bulk of the production), great rhyming, and tracks to nod your head to. It's light, it's fun, and I can see fans of Mineo and Wordsplayed hooping to this project for many summers to come.

I'll be the first to admit that I don't keep a close eye on the CHH scene, save for some of the bigger names; I typically avoid mainstream hip hop if I can help it. So I hesitated to weigh in with an opinion on Andy Mineo's new mixtape, but he got my attention with his previous release, Uncomfortable, and I was curious enough to give this one a shot. I find it to be a bit of a mixed bag, and ended up liking roughly half of this mixtape, titled Andy Mineo and Wordsplayed Present Magic and Bird. The songs I enjoyed, and could see myself making a workout mix with at some point, would be "Dunk Contest (Magic Bird)," "Say Less," "Judo," and "Team." While not Andy's best work, it does give us some fun summer tunes to turn up and jam out to in the car. If you're planning on cherry-picking songs, I recommend "Dunk Contest" as the cream of the crop. - 8/3/17 Josh Balogh