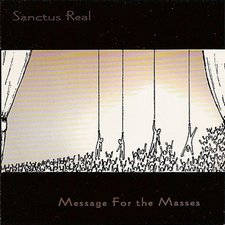 Sanctus Real
Message for the Masses

The majority of people who are currently listening to Sanctus Real are likely unaware of this bands humble beginnings in a garage. Someone who has only recently started listening to Sanctus Real might find this 1999 garage-produced release to be quite a shock; in fact, they might even mistake it for an entirely different band. What may be even harder to believe is that the majority of the lineup that has produced the latest album, Run, is the same line up that put out this album.

The nature of this album being recorded in a garage may have the drawback of having a slightly less than polished production, but this does not hinder the album too much. The sound may be raw, but all of the instruments and vocals are clear. Sanctus Real's style of rock & roll, which has been slowly inching its way off each Sanctus Real album, is on full display here. Many of the songs even carry a punk rock sound, particularly "S.O.S." and "So Long." The pop sound that they currently boast is almost nowhere to be found. The only song that carries any pop sensibilities is "Forever And A Day." Message for the Masses is mostly rock & roll with some ballads thrown in for good measure. Songs like "One of The Best," "So Long," and "Coffee of Life" make you realize that this is a band that really loves to play music and encourage people. And it rubs off. This album is really fun to listen to. When the album slows down, it has a powerful effect. Recognized is just Matt Hammitt, an acoustic guitar, and him being completely broken before God. "After Today" (which later was re-recorded for their 2002 label debut, Say It Loud) is a power ballad with a rousing climax during which Matt sings with such passion that you can almost begin to hear his voice begin to crack.

If you need a polished sound when listening to music, Message for the Masses is probably not for you. But if you like raw rock & roll or punk rock with honest Christ-centered lyrics, than this album will surely be a valuable album to have in your music library.