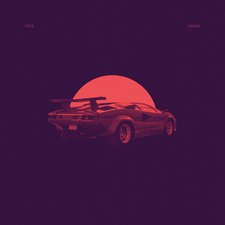 
Barely a year since their last full-length release, Jason Martin and Starflyer 59 return with the five-song EP, Miami. This beautiful little gem contains three new tracks and two reworked tracks from last year's Young in My Head. On one hand, you could say this is an extension or B-sides from that album, given its themes of relationship strife, aging, and where Martin's music fits in the industry. On the other hand, the sound here cuts back the distortion on the guitars and gives the EP a cleaner feel. It's the type of sound you'd want coming from your speakers if you were driving in a tropical place like, say, Miami.

The EP opens with its title track, an acoustic guitar driven song dealing with a friend or relation working through hard times ("I dropped you off at the halfway/'Cause you said you'd been doing too much/How can you get so low and so seedy/A dog would know it's enough"). Next is the excellent single, "This Recliner," which seems mostly about growing old and dealing with infirmities but could also be a metaphor about his relationship with the music industry as seen in lines like, "So what if I get out just to get back in/It's what I'm living through and living in." "CV2" is the first reworked song and likely stands for "Crash Version 2". Originally the closer on Young in My Head, here it serves as the crux of the EP, being delivered in a more '90s indie-rock fashion. Most of the lyrics come from Martin confronting someone and realizing how "everyone can crash," eventually seeing that he, too, can "crash."

"Once More" carries on this internal introspection as Martin wonders if he can change to fix broken relationships ("So I close my eyes and I pray to God/Please, can I change once more"). Where another artist would be tempted to make this a morose song, Martin makes it one of the most upbeat tracks musically, perhaps hinting at a sense of resolve and hope. With the closer, "Bored," Martin reworks "Cry," keeping the verses but updating the chorus. The change is significant, since in the original, the chorus carries a note of self-pity. Here, the chorus seems more honest about the situation as Martin admits, "'Cause my thoughts are feeling cold/Could it be because I'm old/Or could it be that I am bored/Somehow I never saw the writing on the wall."

It's these little changes and themes that make Miami such a powerful EP. It doesn't feel like a cash-grab or something lightly thrown together. Instead, it feels simultaneously like an extension of Young in My Head and a logical progression from it. Perhaps this is a pivot to Starflyer 59's next full-length. Maybe it's only a pit stop. It's still a worthy rock release that indie rock fans and people who want to jam with their windows down should pick up as soon as they can.