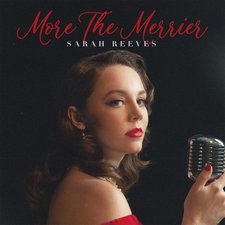 
Those familiar with Sarah Reeves' pop sound will find a surprise when they listen to her new Christmas EP, More the Merrier. Leaning into a nostalgic, old-fashioned Christmas, Reeves tosses off her pop roots to embrace jazz. Given her airy vocals, though, this EP feels more smoky or (dare I say) sultry than the smoother sounds of, say, Sinatra. What's also surprising here (given how most Christmas projects go), is that Reeves mixes in well-known classics with new originals.

If the music is meant to make one nostalgic for the Christmas season, the lyrics of the original tracks more blatantly push in that direction. From the opening title track--which makes for a great post-pandemic holiday anthem--to the closer, "The Greatest Gift," Reeves wants to evoke all the warm feelings this time of year brings. For the most part, these songs work. The title track is fun, and "Snow Globe" captures the wish and whimsy of wanting to hold onto the season as long as possible. "Sentimental" drags a little, but conveys a slightly more melancholy side. "The Greatest Gift" is the one original that eases off on the nostalgia to acknowledge the true gift of the season. The "Gift" is never specifically named (just a vague "you"), but given the presence of "Go Tell It on the Mountain" earlier in the set, Jesus is heavily implied.

While the originals on their own can get the listener in the Christmas spirit, the covers also do their part. "Holly Jolly Christmas" is given a fun treatment and goes well with the title track, while "Winter Wonderland" (featuring a duet with Clark Beckham) also jumps in on the festivities. "My Favorite Things," given its musical arrangement, feels like it was ripped from a James Bond Christmas story (if that exists) and is perhaps Reeves' best vocal performance on the EP. "Go Tell It on the Mountain," while given a fun, upbeat jazz remake here, nevertheless suffers from the fatigue of being covered by everyone else doing a Christmas project. Reeves' version isn't bad; it's just a song that needs to retire for perhaps a few decades.

More the Merrier is a departure for Reeves, but it works. It shows her range and what she can do in a sub-genre that everyone else plays in from time to time. Clearly, this wasn't just an average, ho-hum Christmas cash grab for the pop singer. There's a feeling of care in the covers chosen and the originals written, and that makes it one of the better Christmas offerings you could find this year. In many ways, it's like going to a holiday party at a smoky jazz lounge. You'll have fun, you'll be entertained; you just won't find much depth in the conversations. That's not necessarily a bad thing, though. Sometimes you just need to enjoy the season and More the Merrier will help you do that.