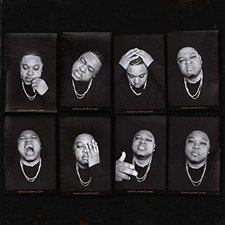 
Reach Records veteran Tedashii is back with his first full-length release in five years with the 17-track Never Fold, drawing inspiration from the biblical passage found in Luke 9: "No one who puts his hand to the plow and turns back is fit for the Kingdom of God." The last time we had a full-length from T-Dot, he served up a masterpiece in Below Paradise in 2014, making Never Fold a long time coming.

Never Fold starts with a soft/slow intro track ("Theres a Heaven"), followed by "God Flex," a straight-up banging track that is a perfect start to this album. The track carries some amazing production and fire spitting by both T-Dot and Trip Lee in a song focusing on how big God is. The Texas native says it best, "It's about a time in my life when it felt like I wanted to give up. But the sun came out and it made everything new. God flexed in my moment and he can flex in your moment." The theme of never giving up, finding joy, and being strong at all times is ever present both in this song and throughout the entire album. "Get Out Of My Way" comes next and features another Reach labelmate, Lecrae, and the two combine for their best joint effort since "Dum Dum." The features don't stop there on Never Fold. As the album continues, you will hear the likes of Crowder, 1K Phew, and Jerry Manna - among many others - making for a complete hip hop album. In "Son Of Sam," (drawn from the recent Andy Mineo song) the rapper hits on the back and fourth struggle of trusting God at times, particularly when he remembers losing his son. The track is open, raw, and heartfelt. The follow-up to his lament is "Home," as the rapper cries out to God and just wants to be home again.

Other standout tracks are "Splash 2," a sequel to the equally awesome track from last year with 1K Phew, "Hold Me Down" that carries flaming beats and good spitting, "Full Effect" which is guaranteed to be played at your next house party, and "All in Love" which has me reminiscing about some wonderful 90's R&B. Each track, while unique, is great and worthy to be added to your playlist for this year. While "Never Fold" is one of the better rap albums I have heard in a while, it isn't perfect, but the focus of becoming stronger during hard times and trusting God even when your past has given you nothing to hold onto gives rap fans no reason to not play this over and over. The CHH veteran expressed it well when defining the album's purpose when he said "Never Fold is a reminder to never back down," and I completely agree with him. Be sure to check out Never Fold, and catch Tedashii on the "Unashamed Tour." It looks like a great start for Reach in 2019.