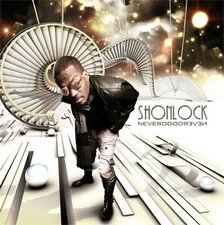 Shonlock
Never Odd Or Even

I've been a rap fan for a long time and I still remember first listening to Verbs' album Unlocked back in 2003. I noticed this guest rapper who was rapping a lot better than Verbs himself was. His name was Shonlock and I was soon hoping for a solo joint to come out soon. Well, I did a little research and found that this guy had worked with Aaliyah and Arrested Development in the past and had just stepped into the Christian music scene. It's been awhile since then, and Shonlock has been busy; he released a couple of independent projects, toured extensively with TobyMac, and most recently, dropped a nine track EP that received rave reviews. Now, the finished product of his debut solo effort, Never Odd Or Even, is finally here.

Never Odd Or Even seems to be purposefully divided into four separate sections as you listen. We'll go through the album set by set and you'll see what I mean. The first three tracks all carry the same musical vibe. The production has a digital/techno sound while the choruses are catchy and radio-friendly. Each song comes out nicely. Tracks four through six sound like Lenny Kravtiz showed up in the studio to team up with Shon, and the result is some very groove-filled funk rock rap tunes. The sound is extremely creative and some of the best musical artistry that I've heard in a while.

The next two songs carry an R&B feel, and the following song, "Scarred," is a standout listen. The depth is more prevalent here as the Illinois native sings and raps about the scars gained from life and relationships. The remainder of the album is filled with catchy but mediocre songs altogether. The closing title track stands out from the pack, but unfortunately it's in a bad way. The almost 80's pop rock infused sound doesn't really work all that well, and the end result is horrid despite the focus of the lyrics being a good concept.

All in all, the production is most unique, the lyrical depth is solid, and the album as a whole is good enough to eclipse its flaws. Never Odd Or Even is a great pick as a soundtrack for any party or road trip that you might be planning this summer. I fully recommend that you go out and grab this release. It will be well worth it.