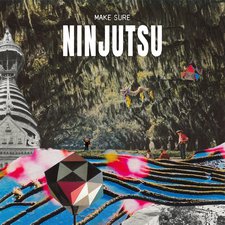 
The creative brainchild of Joshua Aubrey Jackson, Make Sure is the kind of music best described as intimate, warm, and arresting. After ten years of being independently released under various monikers, like Fiery Crash and Summerrooms, multi-instrumentalist Jackson signed with Tooth & Nail Records for his latest album, Ninjutsu. It's low-key indie-pop at its finest, and a much-anticipated album since this reviewer first heard lead single The Day That I Moved Out. This track about letting go of control struck a sadly poetic nostalgic nerve, and I was eager for more.

That's the funny thing about first impressions and expectations, often they don't quite match up. In this case, that's certainly true, though only to a slight degree. The two singles that would follow ("Girl Drummer" and "Japanese Bonus Track") before its September 3rd release were also strong offerings leading to a nearly impossible fever pitch hope that this could be an Album of the Year candidate. Thankfully, while it falls short of that metric, it's still an excellent slice of indie dream pop/folk with a story of heartbreak, grief, and moving on with a cohesive thematic thread woven throughout. The aforementioned "Girl Drummer" is a terrific piece of storytelling, utilizing a musical left turn in the song's latter third, just when you think you have gotten the song groove you were going to get. In addition, knowing the story behind the song makes it even more memorable. It's worth looking up if the lyrics are not self-explanatory enough.

A highlight not previously dropped before the release date is the gently sad "Sometimes A Man Has Nothing to Say," which evokes the feel of a smokey room and a crooner on a dimly lit stage. The female backing vocals add to the tenderness, along with some strings for just the right touch of melancholy. Nihonkai" draws you in with a nearly minute-long instrumental beginning of simple guitar plucking before ending all too quickly with a few lines at a short 2:03 runtime. While short on words, the song excels at producing a feeling of longing for a relationship lost. Picking up the pace with the electric guitar taking the forefront, "Everything I Need" is a reminder to be grateful for having what we need, even if we ache for more.

Nothing on the album is egregiously distracting or downright bad, but "Tiger Shark" though pleasant, strikes too close of a resemblance to George Harrison's "My Sweet Lord." This was hard for me to get past once I heard it. The closing tune "Okay Sea" borders on boring as its nearly seven-minute runtime never builds or goes anywhere. The plodding nature of the song screamed for a new direction far before it ended and drug the album down. This is a bummer because such a strong album ending on such an unmemorable note could leave listeners with a lacking last impression.

All in all, Ninjutsu is a worthy listen on the mellower side of the musical spectrum. This is an album about relationships, horizontally focused and charming in its vulnerability. The whole record is worth at least one listen, especially if you have liked the singles or folksy dream-pop musicality. "The Day That I Moved Out" is in contention for my song of the year, and it's been on repeat since I first heard it as one of my most-listened-to tracks this year. Additionally, songs "Girl Drummer," "Japanese Bonus Track," and "Sometimes A Man Has Nothing to Say" are all playlist add worthy. "Make Sure" you give this one a shot!