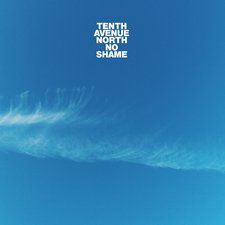 
In the ever changing world of pop music, many bands find themselves conforming to the norms of the genre in an attempt to stay relevant, and usually lose their own identity in the process. While this is true for most bands, Tenth Avenue North has had a history of staying relevant and fresh in the pop-rock scene, despite not doing much to shake up the formula. Even though some of their work has been hit-and-miss with both fans and critics alike, their undeniable passion for music and spreading the love of Christ through that medium has always been at the forefront of the bands mission; and it is just as clear in their latest endeavor, No Shame.

After a brief spoken word about shame, the album kicks off with the buoyant title track; an encouragement to Christians who are now free in the Lord to live without the weight of shame from previous mistakes. Following this up is the worshipful anthem Heaven Is Now, a plea to live out Christianity here on earth without holding anything back, I dont want to wait / Until I see those Pearly gates / Let me bring Your grace / Into this world and recreate / Not gonna wash my hands, and say let it burn / I want to burn with Your love instead. Someone To Talk To is another song that has come to be expected on a TAN record, featuring deep and thoughtful lyrics backed by accessible pop elements. It speaks about an important issue that many churches can struggle with; being there to listen to the hurts and issues of those in the congregation, without coming across as ignorant or condemning.

While about half of this release could be classified as upbeat, those looking for the classic TAN ballads (such as You Are More, from The Light Meets The Dark) will be satisfied with Greater Than All My Regrets and The Future. The heartfelt lyrics found in the former showcase the genuine faith they have in Christ: So If I fall, and if I fail / I will trust Your mercy is greater than all of this / If I bend, and if I break / Ill trust the hands that hold me are greater than all my regrets. The latter focuses on the importance of not taking for granted even the little things in life, and how we should embrace every high and low.

Generally speaking, from an artistic standpoint, the band isnt known for taking many risks. That being said, the alt-rock based Paranoia will come across an unexpected turn to most listeners; and, fortunately, its a great surprise that ends up being an album highlight. The bouncy Reaching is also a creative tune that features an array of various instruments, which all come together to form one cohesive masterpiece. Both are worth a listen, even for those who havent been fans of their previous material.

Unfortunately, these peaks also come with their valleys; in this case, mainly towards the back end of the album. The poppy Call My Name doesnt stand out compared to the other stronger numbers, and sounds more like filler than anything. The same can be said for the piano-driven Space To Speak," which disappointingly has a been-there-done-that feel to it. Thankfully, the inspiring Always Been You fares better than the last two tracks, and serves as a fitting closer to the record. Despite these low points, fortunately, they take up a smaller percentage of the release than the stronger offerings. While not a perfect endeavour by any means, Tenth Avenue North has succeeded in creating an enjoyable pop experience that's well worth checking out for fans of the group, or the genre in general.

Veteran CCM pop-rockers Tenth Avenue North have always been more of a thinking man's band than they get credit for. With the thoughtful songwriter Mike Donehey at the helm, the band has been quietly releasing subversively thought provoking music since their beginning.

While sitting comfortably with fellow artists on Christian radio, the band pokes a little deeper than you would expect, but covers it all with a traditional pop sheen. Their last EP, The Things We Have been Afraid to Say was a terrific and sometimes heart-rending look into the underbelly of evangelical culture, yet because of its tunefulness, this might not have been apparent on the surface. No Shame continues this prodding theme of asking hard questions set against some of the most modern songs that the band has written to date.

The first track finds Donehey in a casual, yet forceful, preacher mode (much like his topical video blogs that he is known for), and parses the difference between healthy and toxic shame, against a vaguely electronic, ambient backdrop. The title track, which comes next, finds the band swinging with a light hip-hop beat, and digging even deeper into the theme of shame, counterpointed with the vocals of new artist The Young Escape. With a joyous, infectious beat, the song masterfully matches the theme of no shame with the kind of carefree tone that is sure to lift the spirit of the listener. In Heaven is Now, Donehey hits upon the subject of his upcoming book, Gods Life For My Will, by exploring the opening line of the Lords Prayer, on Earth as it is in Heaven. In Paranoia, the band also hits upon an important subject, particularly while heading into an election year, in calling out the evangelical subcultures increasingly unhealthy tendency to believe and perpetuate conspiracy theories. That a band would dare to kick the hornets nest like this is to be commended, and hopefully will be well-received and thoughtfully carried forward by other artists. (This song unfortunately loses a few points for attempting to rhyme the word paranoia with the phrase no good for ya.)

In the end, No Shame feels like a bookend to their recent EP, in that it deals with several tough subjects that are only loosely related, yet vitally important. This doesnt always make for a cohesive album, but the band still is to be commended for breaking new ground and diving into areas that more Christian artists should be talking about. No Shame is a slightly uneven listen, but a good opportunity for reflection and questioning important issues. - Review date: 8/16/19, Alex Caldwell of Jesusfreakhideout.com

Highlight songs are the joyful title track, the duo of hopeful mid-tempo songs, Greater Than All My Regrets and Future, and lastly, the worshipful ballad Space To Speak. As an album, it tackles the topic of toxic shame, and keeps it accessible by wrapping it in memorable melodies and catchy hooks. No Shame is another solid album from Tenth Avenue North--a band willing to tackle the lesser covered areas in the life of believers. - 7/31/19 Josh Balogh