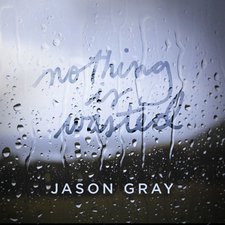 Jason Gray
Nothing Is Wasted EP

The radio edit is a delicate thing, as a song's transition from a piece of a whole album to standalone single often loses something in its revision. Thankfully, "Nothing is Wasted," a highlight from Jason Gray's standout 2011 release, A Way to See in the Dark, survived the process and turned out to be one of his most successful radio songs yet. While a new record is in the works, Gray's latest single gets a bit of a promotional push via an accompanying digital EP, Nothing is Wasted. Though only one of these songs is actually "new," the EP makes this radio remix available to all, with a few bonus tracks for good measure.

"Nothing is Wasted" still stands as one of the strongest moments from A Way to See..., and though it has been a fan favorite since its release, the somber sound and not-so-radio-friendly structure made it a less obvious pick for a single. The remix opening this EP finds a happy medium with a gently reimagined new version, designed to up the radio appeal and give the special song a chance to be heard. Producer Ben Shive's remix accomplishes this without compromising the heart of the original. Notably different is added strings and ambiance, a sweet vocal duet by Lauren Daigle, and a softer alternate bridge replacing the original's big drums. It has a somewhat different and less weighty flavor, yet the integrity of the song remains, a challenging feat indeed. Rather than dashing off a hasty radio edit, Shive has produced a beautifully crafted, musically tighter version.

The remaining tracks, all taken from the A Way to See... special edition, stick with less-polished acoustic roots. A piano version of "Nothing is Wasted," true to some of his other alternate demos, gives a peek into the writing process with slightly different lyrics, and stands out as one of his most vulnerable and compassionate vocal performances. Another notable track is the haunting closer "The Angel of Your Presence." Hushed vocals and subtle instrumentation give atmosphere to sobering lyrics about the quieting presence of God in the midst of hurt and hope.

"Before I've Done Anything" and "Love is Rebuilding Us" are lyrically strong as well, though their musical vibe differs from most of Gray's other work. It's fun to notice lyrical concepts that connect with other songs, like how "Before I've Done Anything" explores unearned identity as a child of God or how "Love is Rebuilding Us" works as a companion to "Nothing is Wasted," echoing the idea of beauty coming from ruins. Still, these two songs have an unfinished B-side feel, interesting and fun for fans but not quite at the level of his strongest work.

Overall, these are fine songs that maintain Jason Gray's thoughtful and thorough sense of lyrical craft through a stripped down musical approach (with the exception of the polished production of the title track). Still in the end, this EP somehow feels more like a promotional assortment of extra songs than a cohesive mini-project. Those who have discovered A Way to See In The Dark but missed out on the special edition will find this an affordable way to fill in the gaps, but newcomers might do better to start with one of his excellent full-length projects and look forward to new music later this year.