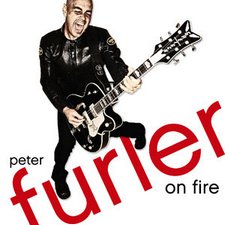 For the last couple years, no other band in Christian music was in the news more than the Newsboys. Lead singer Peter Furler announced he was amicably leaving the band with which he had performed his whole musical career, stunning the industry in the process. Selling most of his possessions and moving to Florida, he effectively left his Newsboys days behind him and started a new life of other artistic endeavors. But as a musician-at-heart first and foremost, jam sessions with fellow music-making friends were inevitable (mainly with Steve Taylor and Me In Motion's Seth Mosley, plus others) and he penned enough quality songs for a full-length album, the result being On Fire.

After listening to the album once through, it is painfully obvious which member of the Newsboys was controlling their musical direction all those years. Indeed, at first glance, On Fire is yet another Newsboys album. With Furler's trademark Australian accent at the forefront and a pop/rock blend of guitars and synths to boot, it's a pre-Tait Newsboys sound through and through. Stylistically, it falls somewhere between the dance-friendly Go and the last Furler-fronted Newsboys record In The Hands Of God, so it's place in a Newsboys timeline makes perfect sense. In a way, packaging the album as a Newsboys album would have been incredibly easy, especially since it doesn't feel mixed the way a solo album usually is. On that accord, labeling On Fire as an uncreative record is tempting at first.

But that would be quite foolish, as the songs of On Fire boast the same Newsboys quality and entertainment value, and that's what makes the album a real treat. With an extremely appealing chorus, album opener "I'm Alive" also sets the stage for an album of rebirthing and restoration ("When I chased one more mirage / 'til I was tired and parched again / You gave me one more cup to fill / and sent me one more desert rain"). "Reach" and "Hold On" continue that same theme, while "Glory to the King" and "Never Ending Love Song" capture the worshipful side of Furler's songwriting ("a sea/a sea of voices sing/Glory to the King/the King of everything/You're here/lift up your hands and sing/Glory to the King/the King of everything"). "Greater Is He" is a grand closer; with former Newsboy Phil Joel's background vocals to remind the listener of the golden days and spoken Scripture by Furler's father, Bill, it's a powerful, majestic way to end On Fire.

Of course, we're not spared Furler's humorous side, either. The apocalyptic "Closer" reminds the listener quite a bit of the classic Newsboys hit "Breakfast" in its goofy, but meaningful, portrayal of unpreparedness for the end times ("little pills/make us nice/shiny toys entice/get us tweaking our resumes/"T" the cross/"I" the dot/we completely forgot /how to number our days"). A guest appearance of Steve Taylor and a light industrial rock sound seal the song as one of the more entrancing on the album. The witty maverick attitude of "Faster and Louder" blasts back at the notion of slowing down as a musician, but both that track and "Psalm 23" are a little hard to take seriously in light of the rest of the album. While setting catchy music to the sacred "Psalm 23" is a pretty novel idea, and though the song goes along perfectly with the album's theme, the synths make for a somewhat cheesy track.

Even though Furler's comeback album isn't an especially inventive endeavor, it's nonetheless an extremely endearing project. Its individual songs are all expertly produced, and though that's to be expected of a seasoned songwriter, it makes this solo record that much more fun to hear. Furler is doing what he does best, and despite its few minor blemishes, On Fire is a thought-provoking, immensely entertaining project at its core and a polished product from an industry veteran.

From the outset, it is hard not to compare Peter Furler's debut solo project to the Newsboys previous ventures; after all, this was the last original member of the band, and writer of most their songs. It becomes very obvious who was directing the band's sound by just listening to songs such as "Matter of Faith," "Closer" and "Hold On." These tracks could have easily been packaged as a successor to In the Hands of God. Furler makes use of a much more electronic sound in some tracks too. These tracks ring back to older Newsboys material, giving the impression of a modern day Love Liberty Disco.

If you enjoyed any of the tracks from Furler's time in the Newsboys, you will find something to enjoy on this album. There are a few tracks that do feel unpolished (For example, the track "Psalm 23" is an interesting take on the words with a catchy chorus, but does feel like it was just an album filler), but overall, the project is a great return for the singer/songwriter. Only one thing remains to be said, and that is 'Welcome back, Peter Furler!' - David Couch, 6/20/11