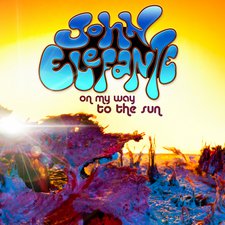 John Elefante
On My Way To The Sun

It's quite possible that John Elefante is one of CCM's most decorated and credited musicians, yet almost completely unknown by most. The former lead singer of Kansas wrote the group's third highest overall charting single -- which is pretty impressive when you consider that the first two are "Dust in the Wind" and "Carry On My Wayward Son" -- and their two highest charting singles of all time on Billboard's Mainstream Rock Chart. Elefante has two solo contemporary Christian albums, several albums with his brother, Dino, under the name Mastedon, as well as numerous other writing and musical credits to his name as a singer, songwriter, musician, and producer. Elefante's newest solo effort, On My Way to the Sun, harkens back to his days in Kansas. This foray into classic and progressive rock may not be for some younger ears, but it sounds just right for fans of the 70's.

The album starts with the very progressive "This is How the Story Goes," which clocks in at just over 11 minutes in length. You may think you are listening to two or three different songs during the first listen, but the repeated line, "A virgin had a Son, and the stone was rolled away. So how can we be terminal? Because He lives today," will bring you back around. "Where Have the Old Days Gone" brings a straightforward rocking 70's sound that is one of the best on the album. The title track is another catchy jam that shifts more to the pop/rock sounds of the era. Elefante adds some keys to the mix in the intro for "All I Have to Do," but keeps a good rock and roll feel going with the chunky guitars and finger tapping leads. The record slows for the first time with "The Awakening." Elefante sings, "What is that sound waking me out of my sleep? It's the most beautiful sound and going all through the streets. They're singing, 'Praise Him'," in the song's big chorus. The upfront 70's rock sound returns on an another album favorite with "Half the Way Home."

The biggest change in pace occurs with the acoustic guitar and violin featured "We All Fall Short." The worshipful song is a reminder that, "We all fall short of the glory of the Lord," but, "the love we crave is the love that He brings; a far greater love than anything we can conceive." The song, especially the in the bridge, is reminiscent of some Beatles material. "Don't Hide Away" is another solid 70's rock tune whose verse shares a similar sound with the chorus of Wilson Pickett's "In the Midnight Hour." "This Time" finds things slowing again with a strangely Oasis-esque atmosphere in the verses. The lyrics focus on the struggle of a young girl considering an abortion. The girl hears God's voice calling her to keep the baby while the cold-hearted clinic personnel attempt to push her forward with the procedure. The track doesn't really fit in with the others, but it's definitely still worth a listen. Finally, the album ends with a song more in line with Elefante's earlier contemporary work in "Confess." It's another worshipful song that urges one to, "Praise Him, and fall to your knees, and confess with your lips that Jesus is Lord."

John Elefante has possibly released his best record since Kansas' Vinyl Confessions. On My Way to the Sun is a nice collection of 70's rock inspired songs. There are tons of positives and many aspects fans of the era will enjoy. Other than a couple of songs that don't quite blend with the overall cohesion of the album, there isn't much negative to say. Again, this album is probably not going to be for our younger readers, but it may be right up their parents' alley. Anyone who is a fan of classic and progressive rock should definitely give this gem a listen; John Elefante is sure to impress.

After 10 years of almost complete inactivity, and 14 years since his last solo studio album, former Kansas lead vocalist and Petra producer John Elefante decided to go back in the studio, much to the delight of his still-thriving fanbase. A successful Kickstarter campaign led to a distribution deal with Syntax records, and the result is an album which can only be described as one of the most phenomenal albums of the year so far, On My Way To The Sun.

Influences to the sound range from Elefante's days with Kansas (soaring 80's Arena Rock) to his CCM and Christian Rock work as a producer in the 90's, and even calling back to the Psychedelic Rock days of the late 60's and 70's. All these influences are evident in the massive opener, "How The Story Goes." The 11-minute track features, not one, but TWO extended solos EACH from Kansas' violinist Dave Ragsdale and guitarist Rich Williams. It is an epic and immensely satisfying track that has a great shot at ending up in my top-10 at the end of the year. And in the gut-wrenching "This Time," Elefante rediscovers the art of the power ballad with this very personal song about a 13-year old girl decides at the last minute to save her child from an abortion. The chorus, sung from God's perspective, is truly goosebump-enducing. The 70's rock-meets-New-Age track "The Awakening" is another favorite, and my personal highlight lyrically ("What is that sound waking me out of my sleep? It's the most beautiful sound going out through the streets/ They're singing 'Praise Him!"). And the acoustically-driven "Confess" finishes the album with a musically (if not, admittedly, lyrically) refreshing and satisfying conclusion.

Overall, On My Way To The Sun is a positive and uplifting record, but it avoids the modern songwriting methods that make much of today's music so trite and repetitive. It is also embedded with so many classic sounds and gorgeous melodies that even if you don't really like the album, you have to at least admire it. I can definitely say that fans of Elefante's prior works will love this album, and it definitely deserves to earn him new fans as well (yours truly included). - Mark Rice, 5/4/13