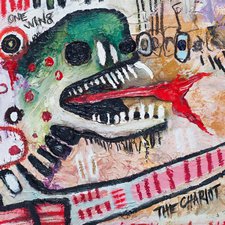 The Chariot
One Wing

When an artist goes from a Christian record label to a mainstream label, it can sometimes be a brand new beginning for the band. They get more media push and, as a result, see some growth in their fanbase and popularity. After years on Solid State, The Chariot signed a contract with Good Fight Entertainment for their 2010 album, Long Live. They made an excellent impression with a good album, and are back with their Good Fight follow-up, One Wing.

So, in case you forgot, when you listen to an album from The Chariot, you need to check all your expectations at the front door. You may even just want to drop kick them down the street. Of course, we all know it's going to be heavy, with Josh Scogin and crew acting as a demolition crew when they pick up their respective instruments. But if you're expecting a non-stop thrash party from beginning to end, you'll be taken by surprise on more than one occasion. Heck, I even got a good laugh out of a millisecond-long clip they inserted into "and" (yes, "and" is the name of the track; the ten-song tracklist from top to bottom reads "Forget not your first love. Speak in tongues and cheek.").

The Chariot's tendency to destroy your speakers and ears with their crunchy guitars, devastating drums and vocal chord-shredding screams is in full force for One Wing. The band is explosive in tracks like "Forget," "Love." and "in." They're also a lot more structured than previous endeavors have displayed. These guys are masters of their craft, and there's no denying their reign after one listen. Along with the destruction, One Wing is their most experimental album to date. Yes, they love to frequently throw out some of the rules defined by a supposed genre. The experimentation begins in "Your," which is a minute's worth of a young lady named Angela Plake singing a few lines from one of The Chariot's older songs, "They Faced Each Other" from The Fiancee. She sings "Busy busy bee walking to and fro, what if we close our eyes, what if we don't wake up?" Her voice has the down-south and old timey feel that puts the listener at peace. It's a little odd to dedicate an entire track just to this, but it still works in the album's favor (plus, the reference to older work is pretty cool).

"First" follows and also tosses out the rule book of what hardcore is "supposed to sound like." Less than two minutes in, the hardcore frenzy stops, and a lone guitar comes in, immediately bringing you into an old western. The track finishes as images of the old west, cowboys and outlaws, and saloons flash through your head. I'd pay good money to see Josh Scogin and guitarist Stephen Harrison have a showdown as this music played in the background. If you saw the teaser trailer for One Wing on the band's YouTube, you probably heard Scogin screaming along with a quietly played piano. It seemed intriguing to me, and come to find out, it's actually the entirety of the track, called "Speak." A soft, somewhat haunting piano that picks up only a little bit is played through the whole song, with Scogin calling for people to forgive and to speak love to others. It's a terrific track, as unusual for the setting as it is.

"and" starts off deceivingly with an upbeat ukelele, but then quickly jumps into the heaviness. You may remember on Long Live, specifically the song "Calvin Makenzie," there was an old ragtime song that sung about Atlanta that cut in for about three seconds. Well, the part that made me laugh was the brief insertion of that same track right in the middle of "and." It's fantastic timing, though. The album finishes with "Cheek." In the middle of the track, a couple of minutes are spent on an audio track of a monologue from a Jewish barber in the Charlie Chaplin movie The Great Dictator. It's a pretty inspirational moment that is intended to motivate the listener to actually do something and to fight for liberty and for a culture that doesn't have race and national barriers. It's a good message.

Speaking of good messages, "in" contains my favorite lyrics from the entirety of One Wing. Scogin screams with conviction: "I'm in love with a bottle of grace, who am I to think you ain't? I'd be lying to you if I said my heart was up for all to see. Because I'm not talking about making lovers out of golden picturesque sunsets. I want to be the one who can bring it to the streets and to the fixed and the victim-esque." We don't know the hearts of other people, but we do know that, fixed or broken, we all need that bottle of grace. Hardcore music has a reputation for just being a bunch of screams and sentence fragments, but Scogin has always had a poetic way about him, and there's no sign of that stopping anytime soon. Combined with his unashamed belief in Jesus, you not only get poetry, but substance.

It took me a good, long while to really appreciate The Chariot. Their first album was too much for me when it came out. But these days, it's much easier, and very rewarding to be a fan of this extremely talented band. The musicianship, lyricism, intensity and passion make The Chariot one of the top hardcore acts of today, and One Wing is an excellent display of that. This is their strongest effort to date. Long live The Chariot.