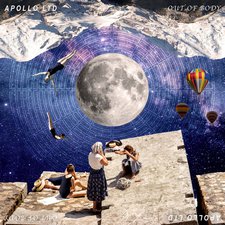 Apollo LTD
Out of Body


We often think of an artist with a national debut album as rookies. But in truth, it's a small, small percentage of artists that truly take off within a few months of joining together as a band. (One of the few exceptions here is Jars Of Clay, but even they took a while to grow into the success they had as new recording artists.)

Residence/Centricity Music synthpop band Apollo LTD may be new on the national scene, but years of toiling away behind the music industry curtains has sharpened their artistic acumen, and their debut album, Out Of Body, feels every bit a veteran release. With shades of alternative, dancey acts like Paper Route, Mutemath, OneRepublic and Chvches, the Apollo guys construct songs around beats and samples, but still infuse them with genuine soul and spiritual urgency. (Though, alas, there is a familiar vagueness of spiritual lyrics being confused with romantic ones.)

But taken as a document of genuine reflection of love (be it of the divine or romantic kind), Out Of Body more than succeeds. With as much tunefulness as ten Backstreet Boys albums, Apollo LTD stack hook upon hook and have crafted an album that just begs to be played on a summer drive to the beach or a late-night cruise through the desert.

Opening with the pulsating, beat-heavy "Drive," Out Of Body immediately sets the tone for a synth-heavy journey that tracks the path of spiritual surrender where the singer realizes that "the only life is the one you make / why would I live any other way? / freedom lies in the road you take / but why do I run the other way? / I'm down to ride / I'll let you drive / ready to let go."

The following "On The Way Up 2.0" (an updated version of a previously released song) is just as epic and wide open, with a cinematic, monster hook worthy of summertime radio. With shades of Imagine Dragons and Peter Gabriel, "Way Up" would be the natural choice for a crossover hit. Current Christian radio single "Gold" is another earworm of a song with a worshipful bent. The glorious melody and the stuttering, rhythmic flow of the verses lead into a bursting chorus that marvels in the ways that the Lord can take our mistakes and "make them shine like Gold."

The album veers into darker territory with "Man I Used To Know" and "Misfits," but still shines hope in the process. While never really going soft on tempos, the album still manages to move in waves that keep things interesting and varied. Further highlights include the sweet "One In A Million," the smooth "Supernatural" (which celebrates love as a "supernatural energy"), and the encouraging "Walk".

With just a bit more precision in their lyrics, the fellows in Apollo LTD would have a homerun of a debut album on their hands. But as it is, Out Of Body is still a marvelous opening salvo that brims with creative rhythmic ideas and positive energy to spare.