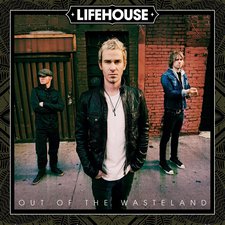 Lifehouse
Out of the Wasteland


Lifehouse had basically faded into obscurity, but Almeria brought on a resurrection of sorts. The southern feel of much of the album was something new for the band. In addition to that, Almeria featured some of their most rocking numbers to date, big sounding pop/rock songs, and a guest appearance from guitar legend Peter Frampton. After being officially back on the map, Lifehouse have returned with Out of the Wasteland. The current album picks up where their last left off, but keeping pace with such a good album can prove to be difficult.

The fast-paced "Hurricane" opens the album and has the feel of a classic track like "Hanging By a Moment." The solid opener gives way to the southern flavored "One For the Pain," which would actually have fit perfectly on Almeria. After two upbeat songs, the guys change direction for "Flight," a piano driven ballad. Jason Wade sings, "I need You now; there's too many miles on my bones. I can't carry the weight of the world, no not on my own." The song continues to build as it moves along and finally culminates in the bridge. Wade continues, "No more running; No more hiding; No more hurting; No more crying; No more trouble; No more sighing; No more falling; No more striving; No more heartache; No more fighting; No more feelings, only flying." "Runaways" continues the record's exceptional start with big drums and a haunting melody. While "Firing Squad" is a decent addition, the opening momentum begins to slow with the track; from there, it completely stalls with "Wish." The song has a pretty sound, but it displays the type of music that took Lifehouse from a household name to people forgetting they existed; it's just a bit of a yawner.

"Stardust" gets things back on the right track. The upbeat acoustic song is very singable and is definitely an enjoyable listen. "Alien" follows and is one of the best tracks here. The lyrics speak of loneliness and being uncomfortable with yourself. Wade sings, "So tired of always feeling like a stranger in my skin," in the first verse and "I don't want to be alone; always feeling like an alien" in the chorus. "Central Park" is a little less interesting musically, but the Bob Dylan vibe of "Hurt This Way" is nice. The song also features some of the deeper lyrical moments present on the album. One minute and two seconds into to "Yesterday's Son" commences a nicely executed acapella section. The music picks up to a moderate tempo folk-inspired tune. Wade sings about being his own person, and not another's choices or opinions, as he proclaims, "I'm not my mother or father and I am not yesterday's son. I'm not broken; I'm a wide open highway with room to run." The album finally comes to an end with the piano-fronted "Hourglass." The song doesn't have the same impact that "Aftermath" had to close Almeria, but it serves as a suitable conclusion in its own right.

Lifehouse showed they were still a band to pay attention to with Almeria, but Out of the Wasteland is proving that it wasn't a fluke. Jason Wade and company have proven that they are refocused and are making high quality music. To those who may have forgotten about the group that burst onto the scene in 2000 with No Name Face and the hit single "Hanging By a Moment," take heed: Lifehouse is still around and are making some of the best music of their career. Out of the Wasteland is a fine example of everything good about Lifehouse and anyone would be well-served to get this album today.