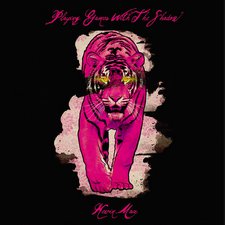 
Kevin Max has been very prolific ever since walking away from Audio Adrenaline -- now releasing his third album in just over a year (It's actually his sixth if you count the B-sides and special releases). Since 2001's Stereotype Be, Kevin has released what he considers to be twelve projects, but claims his newest, Playing Games with the Shadow, to be his first true solo album. Kevin is a big fan of collaborating with other artists and writers, but this is the first album he wrote completely alone. While musicians came into the studio to record, Kevin wrote the entire album himself and even recorded his own keyboard parts on almost all of the songs. Fans who give to his Pledge Music campaign get eight songs up front, but are also promised that there are likely more songs to come.

"Phantom of Terra" opens the album with a two-minute-and-twenty-second instrumental intro before getting into the actual song and the haunting guitar that likely steals the show. Overall, the song is seven minutes long, but manages to feel like much less. It's an excellent start to the record and is one of this reviewer's personal favorites. What follows is the lead single, "The Girl With the Tiger Eyes." This track, like the overwhelming majority of the album, has a very strong 80's influence. "Election" kicks in with bass and drums and carries a much stronger rock feel; maybe something similar to The Smiths. "William Blake" (an 18th/19th century poet and artist) is up next and is also drenched in 80's flavor. It's also more of a rock song with a Modern English type of vibe. "Circus the Night (Human Zoo)" is one of the more interesting numbers present. The music has a circus-like atmosphere to it, but what stands out more are the vocal patterns Kevin uses. Many times, his voice, especially with the vocal effects, is reminiscent of John Lennon. While this album is intended for the general market, "Panic Button" is still overtly spiritual in nature. Kevin sings, "Weightless we drip; sometimes we dip down into the depths of our own doubt, but you know that there's some hope in this. Push the panic button, let go, and let God in." "Muzick is Magic!" is definitely the most rock n' roll song on the album. The heavy use of reverb on the driving guitars gives the music a great sound and is certainly one of the top tracks available. The initial eight tracks of Playing Games with the Shadow wraps up with "Skin of Our Teeth." The song is a piano ballad and also has a bit of a Beatles/John Lennon air. It's a pretty song and a very fitting end to a very enjoyable record.

While Broken Temples was a great album, it's probably the most "commercial sounding" album Kevin Max has released as a solo artist. Perhaps a large portion of that is because many songs were intended for his second album with Audio Adrenaline. Playing Games with the Shadow, however, truly feels like a Kevin Max piece of art. And that's because it literally is. We all know Kevin is influenced greatly by 80's artists and music and commented on Facebook that he was listening to a lot of Duran Duran, Japan, and Modern English while writing these songs. Kevin's fingerprints are all over these tracks and his first attempt to go it alone paid off. K-Max fans should find plenty to enjoy with his latest release. Now we sit and wait with anticipation to find out how many more songs are to come.

As unpredictable as he can be, there is no denying that Kevin Max is a music-making machine. Because of the eccentric nature of his work, it often goes unappreciated, especially compared to his companions TobyMac and Michael Tait. Playing Games With The Shadow finds the talented singer further pulling away from the Christian music industry with a beautiful amalgamation of retro, cryptic and groovy tones that only get more mysterious and mesmerizing with every listen. One theme that seems to come up relatively often is sexual sin, which is most noticeably talked about in "Girl With The Tiger Eyes," "Circus The Night (Human Zoo)" and "Skin Of Our Teeth." Kevin Max is unafraid to speak his mind, but he does so with a lot of artistic skill, to the point where the the exact meanings of these songs are somewhat elusive. The same goes for his political commentary on "Election." Though there are a lot of high points on this album, it is not perfect. The inclusion of the previously released track "Panic Button"--which feels like a black sheep here--and the short tracklist make this album feel a bit rushed. There are also a few other minor criticisms--like the lengthy intro on "Phantoms Of Terra"--but they are easily overlooked given the infectiously catchy and artistic nature of these tunes. Despite its flaws, Playing Games With The Shadow is a remarkably intriguing release and proves that Kevin Max still has a lot of tricks up his sleeve. - Review date: 5/27/16, Christopher Smith