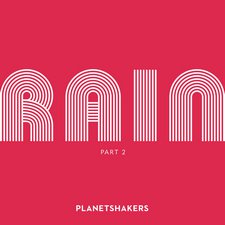 
Calling the Planetshakers collective prolific is a bit like classifying New York City as slightly populous, describing the Grand Canyon as a somewhat sizable hole, or categorizing Kanye West's personality as a tad less than completely humble. In other words, such a label would probably fall somewhere in the middle ground between gross underestimation and a blatant stating of the painfully obvious. To prove the point, one need only glance at the topmost portion of the ever-busy Australian worship outfit's discography, which shows no less than five live efforts, a combo CD/DVD offering and a Christmas project hitting the streets during the last twelve-month period. Even more tellingly, the abovementioned seven items sit atop a whopping thirty-six other entries in the back catalog, all of which were released after the turn of the new millennium.

Like the handful of EPs that preceded it, the Rain Part 2 extended player should find favor with existing fans of the band's now-familiar combination of lively dance-pop and slower worship-oriented fare. In the former category, the agile lead-off cut, "Anything Can Happen," pulls from the same terse syncopated rhythms that allowed songs like "Heaven on Earth" (which appeared on last year's album of the same name) to burrow into the listeners long-term memory. In the latter class, tracks like the sweeping praise power ballad, "Take Your Place," will almost surely set to swaying those who happen to experience them in the live concert setting.

For the remainder of the proceedings, however, the group mostly revisits already-plowed ground. Indeed, from the peppy, but largely generic, "I Choose You" to the by-the-numbers pop-worship of "Anything Can Happen," even long-time devotees will be forced to admit that much of what they hear on the new record has already been done many times before--by both the Planetshakers, themselves, and the seemingly endless number of radio-friendly artists who sound almost identically like them. In its defense, Rain Part 2 is certainly a pleasant enough showing by an ostensibly sincere and thoroughly engaged set of singers and musicians. By and large, though, it would appear that the point of diminishing returns has, at long last, been reached and perhaps now is the time for the industrious Aussie cooperative to let the creative ground lie fallow for a bit longer between successive outings in order for the creative juices to replenish.