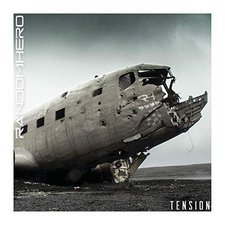 
Rockfest Records, the label created by Seventh Day Slumber frontman Joseph Rojas, has consistently been churning out quality rock music from their growing reservoir of artists (The Protest, Zahna, and Amongst The Giants to name a few) since its announcement, and the latest release from Random Hero is no exception. Produced by Memphis May Fire's Kellen McGregor, Tension is a tight and cohesive 10-track rock endeavor, featuring some of the band's most solid work to date. While maintaining their own definitive sound, there are similarities to groups such as Disciple, Skillet, and even Imagine Dragons, which work quite well when meshed together.

Opening up the record is the fierce "Desperate Measures," an in-your-face rocker that has the band crying out to God for help in distress: "Oh Lordy / Save my soul, save my soul, please save my soul / Everybody's got their sights on me / Suffocating on my chains and tethers / These desperate times / Call for desperate measures." The head-banger "Motivation" follows this up, and is easily one of the strongest numbers on the record, boasting a memorable chorus with a great hook. "Weight Of The World" is another fast-paced rock track, which focuses on the burdens people can feel and face due to life's circumstances. The title track shakes things up nicely, with its more arena-like musical approach, and sets the premise for the album from a lyrical standpoint.

The next two songs, "Outgrown" and "So Close," showcase the softer side of the band's material and slow down the pace for a bit. The former has a chill, 'Imagine Dragons-esque' vibe to it, and, fortunately, it works to the song's advantage and ends up being a highlight with its heartfelt lyrics, "I will hold you down when you fly too high / I will pull you up when you drop too low / I will hold the pieces of you / That you have outgrown." Unfortunately, the romantic "So Close" ends up being a stumbling block to the flow, as the borderline cheesy lyricism and musical styling clashes with the rest of the stronger offerings. With that in mind, it is still a decent track worth a listen; but it's just not as potent as what it could have been, if given a bit more thought.

Thankfully, the rest of the album continues just as it began. The rocking "Public Enemy" and "Set It Free" are both welcome additions to the record, and help keep the energy up at a high level. "The Sound" explores the idea of someone who is haunted by their past and is struggling with the devil's lies that they're too far gone: "I'm holding all my demons / They think I'm in too deep / They whisper in my ear / Your soul is way too dark to keep // This is the sound / Only hope can save us now." However, the anthemic closer "White Flag" brings all the stress, anxiety, and confusion seen throughout the album full circle, as the band ultimately surrenders everything to God: "I'm raising my white flag / I surrender all / My God as my witness / Lord, I'm running home."

One of the strongest aspects of Tension is the lyrical cohesiveness throughout its entirety, as it focuses on the same struggles and issues (chaos, stress, and shame for example), without coming across as too repetitive. With the exception of "So Close," every track offered here is about as solid as it can get. The only other potential issue that the record deals with is the length, as it has a runtime barely reaching over thirty minutes, making it a rather short affair. That being said, Random Hero has crafted an excellent project, one that can definitely contend for rock album of the year. For fans of bands such as Disciple, Skillet, RED, Seventh Day Slumber, or just the genre in general, this release is one you won't want to miss out on.

This is a succinct, crisply produced, hook-filled pop/rock album featuring chugging guitar riffs, and soaring vocals thats worthy of high marks. The songs Desperate Measures, Tension, and White Flag are absolute jams. Random Hero is a band to keep an eye on going forward, and I wouldnt be surprised if they are destined for big things. - 8/21/19 Josh Balogh