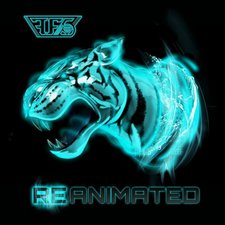 In 2008, crunk rockers Family Force 5 took a significant stylistic turn when they began shifting their sound toward a more distinctly electronic-based dance groundwork for Dance Or Die. The following year, the group released their first-ever remix project, titled Dance Or Die with a Vengeance, which began to show a little more of an urban flavor. It's a sound they then explored further for their debut Christmas project just a couple months later. Their third album, III, continued to take their sound in this direction, and ever since its 2011 release, the band has been releasing new EPs and remixes that broaden their spectrum--from worship to club/dance to gangsta. Now, in the summer of 2013, they bring us Reanimated: three new songs plus 9 remixes (some old, some new).

Reanimated opens with one of the band's newest songs, "Chainsaw," which they debuted near the end of 2012 on their Christmas Pageant tour as part of their dance party segment "Phenomenon." It'd fit pretty soundly on III and basically serves as a ridiculous and fun rap-fueled dance anthem that has more of a bite than "Wobble." Rapper Tedashii was added to a new mix of the song earlier this year (much like Lecrae was later added to "Cray Button") and that is the version you get here. The techno-fueled dance song "Phenomenon," which is ultimately a theme song for the FF5 dance party, is a more melodic and toned down party jam. There's a stark contrast between "Chainsaw" and "Phenomenon," but they still play well enough next to each other. The first of the remixes then follows; "Superhero (Nico Stadi Remix)" is a techno dance update of the song that takes the worship ballad and gives it an Andy-Hunter-esque trance flavor. It fits nicely after "Phenomenon," but it slows the party down further after the energetic opener that "Chainsaw" is. Still, it marks a shift from new material to remixes that helps the party rev up. "Cray Button (McSwagger Remix)" begins to pick things up again, but this version (which doesn't feature Lecrae), still isn't nearly as fun as the original. "Wobble (Smile Future Remix)" is one of the most fun remixes you'll find here, giving the song a retro funk feel that may best the III album original. However, like "Cray Button" losing some of its punch in the remix translation, "Can You Feel It (The Toxic Avenger Remix)" loses the jock jam jawbreaking "oomph" that makes it as delicious as it is. Still, this "Toxic Avenger Remix" has enough of a groove (with some tricks up its proverbial sleeve) to keep it a memorable entry on the track list.

"Paycheck (Riley Friesen Remix)" takes its time to get started, but then dissolves into a chunky dubstep remix that serves as another album highlight. "Zombie (McSwagger Remix)" also utilizes some dubstep and fairs better than the "Cray Button" McSwagger mix. But Riley Friesen knocks another one out of the park again with "Get On Outta Here (Riley Friesen Remix)," fueling the attitude of the original with more dubstep and electronic goodness. Following suit is a new song that pairs the UK's own LZ7 with FF5's Solomon "Soul Glow Activatur" Olds for an infectious party anthem that ought to make Skrillex grin. Unfortunately, here is really where Reanimated should have ended. Fans who've been following Family Force 5 since the beginning just might recognize "Love Addict (RAC Mix)" as something that would be found on their MySpace page years ago. Not only does it not fit in on Reanimated's more modern stylistic approach, but the production value sounds distinctly subpar. But while that's relatively forgivable, the album finale "Put Ur Hands Up (Davis Harwell Remix)" isn't really a remix at all. It sounds like a Relient K piano ballad b-side as the song is reimagined as such, minus Thiessen's reliable vocals. Instead, the vocals here are demo quality and somewhat flat as it's sung, presumably, by Davis Harwell, and no one actually in the band. It sounds like the kind of tongue-in-cheek joke track that you'd find buried 15 minutes after the end of the last track if this were a compact disc. However, it's presented here as its own song and it's unfortunate because it sends the party vibe of the album smashing face-first into a brick wall. Fans may find it amusing, but looking at Reanimated as an album and, therefore, a remix experience of sorts, it sticks out like a sore thumb and otherwise won't make it onto too many mp3 players most likely.

Nitpicks aside, Reanimated is one of the better full-length remix albums to release in recent memory. Perhaps with being a full-length album it doesn't trim all the fat to be as delectably strong as TFK's Metamorphosiz: The End Remixes, Vol. 1 EP, but as a full-length album, there are enough party jams on here to keep electronic (and even dubstep) music fans happy. It's arriving at the perfect time, too, as Family Force 5's Reanimated will be a great addition to anyone's summer soundtrack.