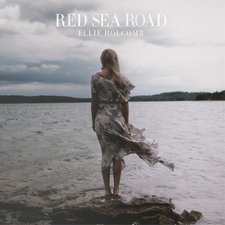 
For those of you who don't already have the pleasure of knowing who Ellie Holcomb is, let me spoil it now by letting you in on the fact that she's one of the greatest contemporary worship artists working on the scene at the moment. OK so, despite being the textbook example of a loaded sentence, consider this: with only two EP's under her belt, Ellie's colorful debut album As Sure as the Sun charted at number one on the iTunes Christian chart. On top of mothering a newly born daughter (which Ellie has said allowed her to pursue a solo career), she also had the prestige of being donned a Dove Award as their New Artist of 2014.

Even if you don't consider her to be some sort of musical revelation, at the very least we should be wary of ignoring what this obviously talented artist has to offer, especially if it happens to take the form of a newly released album. Skipping forward almost three years later and we see exactly that with the release of Red Sea Road, a proper sophomore attempt to follow up the success of Holcomb's debut. By keeping everything that we have come to love from Ellie (her unmistakable Tennessee accent and vibrant instrumental arrangements come to mind) and expanding to include even richer pop hooks while not forsaking the scriptural influence that has latched itself to her work, we are treated to an album that shows no signs of slowing down the process of musical development so often seen in artists who have peaked after their first few attempts.

This Biblically-infused pop formula shines most brilliantly in the song "Wonderfully Made." At five minutes and twenty seconds, it is the album's longest song and rightfully earns the title of centerpiece by being sandwiched smack-dab in the middle of the thirteen total tracks. Yet, it's not the contextual placement that makes "Wonderfully Made" so extraordinary, so much as it is how it manages to sum up the album's themes of internal pain and the restoration through Christ. Ellie has stated that Red Sea Road came from a place of "...suffering and loss but also peace and joy." By pivoting on Psalm 139's authority of the individual being divinely created in the image of God, Ellie allows the Gospel to form as she proclaims her fallen nature and remedies it with the salvation that the omnipotent Lord brings.

I believe this album to be Holcomb's best work, and in the realm of Christian Contemporary Music, this is one that will be treasured for years to come, but in all seriousness, I can say Red Sea Road irks me, not for what it does but for what it doesn't do. It makes no effort to push beyond the sphere of collective enjoyment and worship anthems. Despite its emotional and genuine spirit, the artistic achievements of past producers and musicians show no mark on here. It's another well-produced and easy to consume musical work that is remarkable because the agricultural fields tended by the Christian market have been so volatile to the land that just about anything produced by someone with Angus Buchan's touch will flourish. I have great faith that Ellie holds the potential to produce something to the equivalent of pop landmarks like Pet Sounds and Merriweather Post Pavillion, but until then, we can rest assured knowing that Red Sea Road will at least stay a pearl treasured in our hearts and a foreigner to the touch of a pig's hoof.

Ellie Holcomb's solo ventures outside her career as one of the "Neighbors" in her husband's band, have been sincere, spunky, folky affairs. 2014's As Sure As The Sun produced a few modest radio hits and a Dove Award for best new artist (an ironic award for a seasoned veteran like Holcomb). Red Sea Road continues the Holcomb family winning streak, with Ellie growing into a fiery songwriter who uses a southern music pallet as a starting ground for a great group of songs and ideas on the nature of faith in hard times.

After the downbeat opener "Find You Here," a great song about the lost spiritual state that everyone goes through (it's a somber choice for an album opener though), Holcomb rights the ship with the following "He Will," an anthemic song of trust that has a great melody and an uplifting feel. "He Will" shows Holcomb's knack for writing a memorable and encouraging melody, while the next song and title track is an album highlight, spinning an Old Testament biblical metaphor of hope in uncertain times. With a traditional-sounding Appalachian melody, "Red Sea Road" is a standout song, and one that will be terrific in concert.

If there is the kind of song that Holcomb should write more of, it's "Fighting Words," a feisty, down-home, barn-burning Americana track about self-doubt and guilt. Taking the classic southern expression and repurposing it as a song about fighting the lies of the devil (about self-worth and shame) with the truth of God's word, "Fighting Words" is a textbook example of how to take a familiar idea and phrase and tweak it for a surprising take on the truth of grace in the believer's life: "I will fight the lies with the truth / keep my eyes fixed on you / I will sing the truth into the dark / I will use my fighting words." The closing, rousing "Living Water" and the hushed "Man Of Sorrows" end the album well, with a personal call for revival, and a reverent, hushed take on the life of Jesus.

Red Sea Road is a terrific album that has a strong, passionate Americana feel, and just enough great songs to carry the less interesting ones along with them. Holcomb is proving to be a treasure of an artist; one who is fiery and unpretentious, catchy without being cloying, and above all, sincere in her writing and seeking. - Review date: 1/30/17, written by Alex Caldwell

Following a solid and well-received debut, Ellie Holcomb continues to build upon her charming, southern-laced folk approach with Red Sea Road. Although the album contains little in the vein of experimentation, what is presented here is nothing short of delightful. "He Will" is an early highlight in that it takes what should be a generic pop melody and turns it into a memorable anthem of encouragement and grace. Likewise, tracks such as "You Are Loved" and "We've Got This Hope" are so infectious and appealing that any expectations of originality are set aside almost entirely. Although a little more artistic growth is welcome, what we have in Red Sea Road is excellent. - 2/3/17, Lucas Munachen