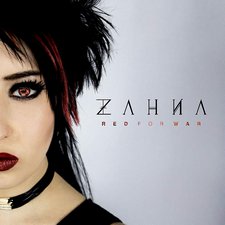 
At a time when Christian rock--or rock in general--isn't the predominant force in music, it's refreshing when a new artist helps keep the spirit alive. And it's even more special when we're reminded that women rock as well as men do, screaming and all. Drawing both from metalcore and indie, Zahna, in her debut album Red for War, shows off her versatile voice with a passion that embodies both genres.

The album begins explosively with "Unshaken" as Zahna roars over menacing metal riffs. Her clean vocals are reminiscent of Paramore but are balanced by her impressive growls. The chorus is very catchy in its own right, and both types of vocal work well together. Lyrically, it's distinguished by having a John Donne quote epically screamed as a bridge. Dramatic? Sure it is, but it's also really cool to have a four hundred-year-old quote screamed at us with such conviction.

The next song, "Misery," while still solid, is not quite as memorable as the previous track. With a Theremin-laced opening, great drumming and another explosive chorus, the song has cool moments, though in other areas it falls flat. The first verse, for example, comes off a little cheesy as she raps in a style similar to Project 86's Andrew Schwab. She doesn't do a bad job, but it doesn't have the menace of Schwab's vocals, which seems to be what she's going for. On the second verse and bridge, however, she's back in her wheelhouse with full-on screaming.

Another iffy point comes on "Underneath," a track that struggles to find its own identity and, instead, sounds a lot like Comatose-era Skillet. Through the main guitar riff and the chorus, it's hard not to think of that album and feel a sense of déjà vu. This is a shame because, in the verses, she sings in a haunting indie style that brings Imagen Heap and Plumb to mind. Lyric-wise, there are well-thought out lines like, "My face is a wall / You see the fractions of glass / That make up my thoughts," which, along with vulnerable singing, pull the listener in.

Whatever shortcomings the previous two songs had, though, are more than made up for by "Divided Nation," a timely message about our society's tendency to get easily offended and lash out at everyone who disagrees. Here, Zahna throws some hard-hitting truth bombs, like, "Everyone's up in arms / Dying to be the right ones / As the grand stories of the media sell (You say and claim it, fabricate it, don't you lie to my face)." Her powerful delivery makes these words hit home as, no matter what side we're on, we can relate with the tension.

The mood changes on "With You," a dreamy, soaring ballad that shows off the indie chops hinted at in "Underneath." It's about the freedom and love she finds in Jesus, and her gratitude is heard through all the emotion she puts into the performance. It's a time in the album when we sit back and wonder how this song, with its mellow electronic vibe, fits with in-your-face hard rock, but it really does. Then comes "Drown," a song that doesn't have a memorable hook to make it stand out, and, all in all, is just okay. While "Your Gun My Knife" is harder than "Drown," it also functions as filler, ticking off some familiar rock and metal boxes without really distinguishing itself from the crowd. Even so, the atmospheric piano break in the middle and end is admittedly cool.

The final three tracks, "Dreamer," "Was I Bad" and "Edge of the Earth" give Red for War a satisfying conclusion. Both "Dreamer" and "Was I Bad" have great hooks, but, in the latter song, Zahna hits some seriously impressive high notes, showing what a vocal powerhouse she is. The last song, "Edge of the Earth" ends the album in a contemplative and hauntingly beautiful way, reminding all of us that our sins are forgiven: "When all else fails / You carry our sins back / To the edge of the earth."

Red for War, though not a perfect album, is a very solid debut for Zahna that shows her wide-ranging talents and reminds us that rock's not dead.