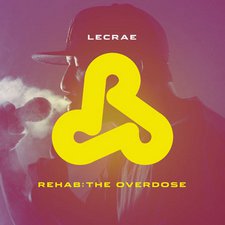 It has only been just over three months since Lecrae unleashed Rehab onto fans with much praise, now he brings the continuation, Rehab: The Overdose. The question on many minds is, "Will Overdose serve as a solid standalone album, or stick out like a b-sides collection?" The answer may be two fold.

On first listen, this offers the most mainstream sound Lecrae has attempted; perhaps he is trying to draw in more listeners. This can also be said somewhat about his lyrics. However, Lecrae fans, do not despair. The lyrics are still in-your-face-Gospel and they are in no way watered-down, but they aren't as thought-provoking as previous albums. A once-over of the record will have you thinking that these are leftover songs that weren't good enough for Rehab. The title doesn't do it any favors either and only adds fire to the flame that screams "B-SIDES!" Though the first thought may be disappointment, the beats will bring you back for another listen and another. After you get listening to the album, you start to forget its association to Rehab and you begin to enjoy it for what it is: Another solid Lecrae release.

The album features several cameos from artists like Suzy Rock, Thi'sl, and Canon, but no one from Lecrae's normal crew makes an appearance. Even though Tedashi, Trip, and Sho Baraka always contribute nicely, it is refreshing to hear some different talent on this release. Overdose sees highlights with tracks like "Battle Song," "Anger Management" and "Like That." "Battle Song" features Suzy Rock and contains one of the standout lines from the album, "And God by all means possible. Give me the faith to live and die for the gospel." "Anger Management" features Lecrae declaring, "Forget a chip up on my shoulder man, I carry boulders" as he talks about anger issues. The song wraps up with Lecrae quoting 1 Peter 2:23 and states that "the Gospel manages our anger the solution is to gain a heart that is thankful for grace in Jesus Christ."

"Like That" is quite possibly the most radio friendly song Lecrae has ever done. The lyrical content is as spiritual as ever, but the beat and hook could easily fit into regular secular rotation. The song talks about Satan's deception, asking the questions, "Why you let him get you like that? Why you let him trick you like that?" More pointedly, the song talks about a girl looking for love in the wrong places and with the wrong men and advises, "If you're looking for love, you need to find God."

Although the album falls short of his previous two releases, Rehab and Rebel, there is still definitely a place for Overdose. Lecrae brings some of his best beats to this effort and keeps his spirituality just as high as ever. If you are a fan of Lecrae or just rap and hip-hop in general, do not disregard this one as being rejects from Rehab. Though it seems this album was a bit rushed or perhaps a bit premature, it is more than deserving of your attention.