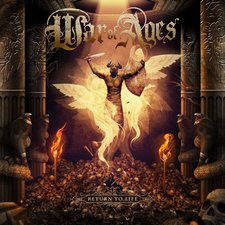 War Of Ages
Return To Life

Metalcore act War of Ages has been around for ten years now and have been a part of the Strike First/Facedown family of artists for seven years. The band has been releasing music in the vein of groups like As I Lay Dying and others since their Strike First debut in 2005 with little to no variation. War of Ages has been excused for their seeming lack of ambition to do something even vaguely different or more creative due to the fact that they have been releasing solid music within the tight confines of the genre (I point the finger at myself more than anyone when it comes to that statement). Will anything change for their latest release, Return to Life?

Return to Life is very promising at the start. The signature metalcore sound dominates the opening two tracks, "Immortal" and "Redeemer," but there is a much clearer hardcore vibe going on. These two tracks are followed by the quintessential metalcore song in "Fallen Idol." Screaming vocals in the verse with big melodies in the chorus are just what you expect from War of Ages, or any other metalcore band. From there on out, the rest of the album is basically cookie-cutter metalcore: chugging guitars; heavy tom-tom dominated tribal drum pieces in the lighter sections; fast, almost blast beats in the more hectic sections; and, oh yeah, some shredding guitar solos that all sound strangely alike from song to song. Even in the portions where it seemed like War of Ages tried to be more experimental with their sound, listeners will find themselves saying, "That sounds like so-and-so." For example, some of the lighter guitars accompanied by ambience, especially in the intro to "Silent Night," sounds a lot like the stuff A Hope For Home was doing on Realis.

Possibly the most interesting thing on the album is the minute and forty-six second acoustic guitar instrumental, "M.E.B." Many times instrumentals on metal albums get weird and take away from the overall product, but "M.E.B." does not. In fact, it is too short and the guitar demands a full acoustic song with lyrics. It's sad to see the most remarkable music on the album being used as nothing more than filler to reach the 10-track mark.

Are there a few things that War of Ages do to make this album sound different than their previous? The short answer would be yes, but sections, like the softer mid-way mark of "With Honor," just seem to be more of a forced sound to be "different" than an actual attempt to do something different. Return to Life makes two resounding points: One, pretty much all metalcore songs sound the same (but I think we all knew that already), and two, War of Ages has some untapped potential they only briefly show instead of highlight. There is no need to do the same solo in every song with the musical ability these guys have.

War of Ages' fifth studio album isn't bad; it's just typical metalcore with very, very little variation. By a band's ten year mark, you begin to look for growth and variation in their musical sound. You want to see musical progression and evolution, but you only get a thinly veiled effort to do so with Return to Life. This should be an album metalcore diehards will love along with War of Ages' established fan base. If you are growing tired of the same old same old, you are probably going to want to look elsewhere. It's hard to make predictions on a next album already, but if they can continue to develop and lean less on the metalcore crutch, War of Ages' sixth release may be something truly special. Personally, I would rather see a monumental failure of a creative attempt than see Return to Life, Part Deux. Time will only tell.