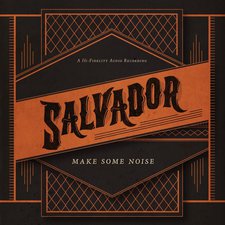 There really is no competition for the title of the "Kings of Christian Latin." This is because, for one, there are very few Latin artists in the Christian Music industry to begin with, and secondly, because of the Latin artists actually in the industry, none compare to Salvador. Even then, Salvador is a name that most of us have not heard for a long time; it has been five years since they released their last studio album, Aware, and even that was more of a deviation from the Latin flavorings of their previous albums to a wider pop-rock appeal. But surely, they are back and armed with a new record label and after five years of preparation, they have decided once again to Make Some Noise.

Fans of Salvador could always count on them to make solid jazzy pop-rock offerings with an uplifting and worshipful focus, and from the moment the opening title track starts until the final notes of the album, that is just what Salvador has given to us again. The lyrics of the aforementioned opener are certainly not the strong part of the song, but the highlight is the consecutive use of saxophone, trumpet, guitar, and keyboard solos in the middle of the song. Following is "Tirate," a six-minute song with a Spanish chorus and an almost completely instrumental latter-half that may just be the highlight of the whole record. "God of Forever" completely changes direction musically, though, as it is clearly created for potential AC radio play and has almost no jazz or Latin influence. In short, it's pretty generic, but with that said, it works strangely well after a couple of upbeat jazzy Latin tunes to open the record. "Better Man" is a more down-tempo track that is solid and brings to mind some more retro 90's CCM (think something similar to Carman). Salvador usually has at least one completely Spanish track, and on this album, that is "Este Corito" (translated, the title is simply "This Chorus"). The song is straight-up Latin funk, and even if one can't understand more than a few words here and there (including yours truly), it is a joy to listen to.

The album peaks at this point, and while it certainly doesn't crash and burn (far from it), they get stuck in a bit of a rut musically. "Inside Out" is certainly a highlight of the latter half; it's a very down tempo track that shares many characteristics with mood music and a very distinct jazzy flavor. The closer, "Not Alone," is a soothing acoustic track that wraps up the album well (if not a slightly odd finish for a Latin pop-rock album). But "Higher Love" and "Who You Want Me To Be" are both excellent candidates for radio stations to use to "change up the pace" musically, and "Deeper In Love" is almost a clone of "God of Forever," only with some more corporate worship appeal. Finally, "Get Up And Dance" feels almost like an obligatory youth-oriented track that will probably be a live favorite (though, frankly, it's also pretty generic within the Latin pop genre).

Overall, the lyrics are rarely deep or overly creative, but certainly they're satisfactory enough for their intended audience; there was clearly an effort to do more than write an album full of simple inspirational/praise tunes. The only real concern I have regarding Make Some Noise is that Salvador doesn't seem to mature or grow musically between their albums. Each record is pretty similar to one another and seem to do little more, artistically speaking, than to fill the void of good Latin pop music in the CCM market.

But the fact remains that the poster children of Christian Latin are back and they have given us a very solid album which serves as a breath of fresh air to those distraught over the CCM industry lacking in diversity of sound. Make some Noise is an effort that will make Salvador's fans happy, win back those who had forgotten about them during their absence, and even gain new fans from those who had never heard of them before. So if you're hungry for something with a little bit more flavor and spice than the pop-rock you usually hear, this is an excellent album to check out.