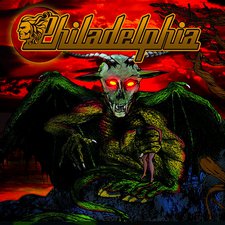 
Given their namesake, one could be rightly forgiven for assuming that the members of Philadelphia first began plying their trade in the city of the same name. The truth of the matter, however, is that the hard-rocking outfit's genesis can be traced to the unlikely locale of Shreveport, Louisiana, in the year 1981. The group's origins were humble, playing concerts at high schools, prisons and the occasional street corner before signing to the now-defunct Patmos label in the mid-'80s. The band put out a pair of albums, 1984's Tell the Truth and Search & Destroy the following year, before calling it a day in 1986.

At first blush, the remastered 2019 edition of Search & Destroy sounds pretty much like the typical hard rock and heavy metal efforts released during the height of the Reagan decade. The leadoff title song is a brisk and bracing slab of metal that, while not exactly unique or ground-breaking, manages to stand toe-to-toe with most of what was coming from both the Christian and mainstream camps at the time. The motorcycle sound effects and invigorating pop-metal stylings of "Fastrack" render the engaging cut a dead ringer for Motley Crüe's "Kickstart My Heart." And the funk-filled chorus of "Mirror Man" interjects an ever-so-slight Red Hot Chili Peppers-like vibe into the trio's otherwise straight-ahead musical aesthetic.

By and large, though, these are the only bright spots in the running order, the remainder of which is given over to awkward rhythms, meandering melody lines and an anemic production aesthetic that saddles the project with an almost demo-like quality. In fairness, the group's unapologetically evangelistic outlook is admirable and refreshing. And front man Brian Clark's singing voice, which falls somewhere near the midpoint between original Petra vocalist, Greg X. Volz, and former Queensrÿche front man, Geoff Tate, is both sturdy and passionate. That said, any theological impact the record might otherwise generate is largely offset by its amateurish, often clichéd, lyrics. And Clark's vocals, as often as not, are delivered noticeably out of tune.

Of course, for those unfamiliar with the metal and hard rock music of the early MTV era, this album, like any other artifact of the period, will seem hopelessly old hat. And, even for those who remember and enjoyed '80s Christian metal, it still pales next to the veritable surplus of superior offerings from any number of Christian and secular artists. Admittedly an interesting period piece for historians and a must-have for die-hard fans and completists - particularly with the inclusion of the previously-unavailable bonus track, "Losing Out" - Search & Destroy nevertheless remains a second-tier effort destined to curry little favor outside the ranks of those three camps.