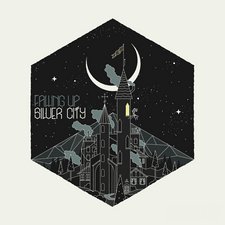 Over the years, Falling Up has repeatedly treated their fans with a flavor of uniqueness not commonly found in today's world of music. Sporting a shift in genre nearly every album, Silver City, their first Christmas project to be released, is no different.

When I first heard that Falling Up would be releasing a Christmas album, I was completely unsure of what to expect. Would the musical genius (and occasional oddity) of frontman Jessy Ribordy and Company fit the shoe that so many Christian artists try to fill year after year?

In short, yes. The EP (if an 11-track project can even be labeled as an extended play) opens with a short track entitled "Intro/Jingle Bells," which flows into a rendition of "Carol of the Bells." Neither of these are outstanding in and of themselves, but they do quite the job of setting up the album. The first actual song on the album is "Emanuel," on which Jessy is joined by Brittany Wiinikka. Their vocals mix very nicely, and provide an incredibly refreshing take on "O Come, O Come Emanuel."

The album plays on through "Silent Night" and then two variations of "Oh Holy Night," on which Jessy surprisingly refrains from hitting the high note. "Oh Holy Night" is a stunningly beautiful piece of work that remains true to the original, but which pushes the creativity as far as possible. "Sugar Plum Fairy" is turned into a dubstep-style track, which has been done before.

The real gem of this album is found with "Song in the Air." Never before have I heard such a beautiful rendition of this piece. Listening to Falling Up play it makes it sound as though it was written by the band members themselves. If you pass up all other tracks on the album, I urge you to at least sample this song.

The album wraps up with two instrumentals (tracks nine and eleven), and an original song composed by the band, "The Little Robot." All three of these pieces are marvelously performed, leaving the listener in a reflective and slightly haunted state.

My only disappointment was when I started to notice that a few lines had been cut out of the songs. On "Oh Holy Night," the line "when Christ was born" is missing, but it doesn't feel 'removed' due to the unique twist on the song. More disappointedly, though, "Song in the Air" replaces the final line of the second verse ("in the homes of the nations that Jesus is King") by once again repeating the final line of the first verse. By no means has Falling Up cut the spiritual content out of the music, but it does seem to have been toned down. The choices of the songs they selected to cover still clearly shows where their faith lies, and they spend the majority of their album revering the birth of their King.

Silver City clocks in at just over 45 minutes, and in a typical Falling Up fashion, contains the originality you've come to expect, but thankfully no lines were crossed. No "Santa in an Aerospaceship" or "Moonbeams of Forest Extilliate" appeared. Silver City is well-worth many spins this holiday season, and will surely provide you with a fresh enjoyment of even the most traditional carols.