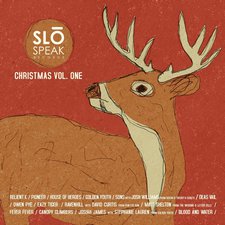 Slospeak Records is still a very young record label, with only five artists on the roster (and only two of which have released albums since the change from "Eden" to "Slospeak"). With Bleach's Davy Baysinger at the helm, it's made a small impact on Christian music, with its fresh approach to the concept of the record label and a dedication to release the artists' best music possible. This year, they've also made the decision to release the best Christmas compilation they could, with a fabulous list of bands and artists that call themselves friends of Slospeak Records.

There's several types of Christmas songs: you've got your fun and upbeat tunes (like "Jingle Bells"), your slow and reverent songs (like "O Holy Night"), and your heartwarming, by-the-fire jams (like "Chestnuts Roasting On An Open Fire"). Slospeak Christmas, Volume 1 has a good representation of all these types of carols, and they're mixed in very well. In addition, each artist's take on their respective song is true to their style (with a few exceptions), regardless of whether it's a traditional rendition or not.

The Slospeak roster shows up strong here. While Blood and Water's "Jingle Bells 2" isn't one of their best tracks, it's a good pop rock song that isn't really related to the classic "Jingle Bells" at all. If you like Weezer, this one is right up your alley. Golden Youth delivers a beautiful indie pop take on "Have Yourself A Merry Little Christmas." Stephanie Smith takes the vocals on this one, as the duo pumps out music like something you may hear from The Lumineers. Their debut was highly anticipated before, and that anticipation has only increased after hearing this song. SONS also take an indie pop approach to "O Come Emmanuel," doing the song justice in a style I haven't come to expect from them, which can also be said for Pioneer, as they bring out some bluesy rock & roll for the jammin' "Run Rudolph Run." Then there's the singer/songwriter Owen Pye, who calms things down after Pioneer's song with the acoustic "O Come All Ye Faithful."

Non-Slospeak artists here are a mix of the up-and-coming, independent artist and the well-known artist. Deas Vail's folky "God Rest Ye Merry Gentlemen" is amongst the highlights, as is Relient K's "Merry Christmas, Here's To Many More" and House of Heroes' rendition of "Silent Night," all thanks to Gotee/Mono VS Stereo. Though some new material would've been awesome, it's pretty irrelevant, given that these are some of the best of these respective artists' Christmas tunes (and to be perfectly honest, I hadn't heard the Relient K or Deas Vail track until I bought this compilation). There's also a track from Matt Shelton of The Wedding; "I Heard The Bells" isn't a bad song, but it's rather forgettable as it's sandwiched in between two standout tracks from a couple of excellent independent groups. Those groups are Ravenhill and Canopy Climbers. Ravenhill's "Go Tell It On The Mountain" takes the best of NEEDTOBREATHE and The Black Keys and puts their own spin on it, while Canopy Climbers puts their indie/electronic touch on one of my favorite carols, "O Holy Night." I see an exciting future for both of these bands - I wouldn't be too surprised if they ended up getting signed to Slospeak in the near future. The closing track to this compilation comes from the Ohio-based indie foursome Fever Fever. Their atmospheric sound gives way to a truly fantastic, Christmas-ized rendition of an old, uncommon hymn called "Of the Father's Love Begotten." The piano, bells (both jingle and not), soaring vocals, and quiet guitar are perfect for a snowy, somber Christmas morning.

While Christmas albums from Christian artists and record labels are in an over abundance (starting in September usually), only a small handful usually end up being legitimately worth spending the money on. Francesca Battistelli, King's Kaleidoscope, and Solid Rock have all released good Christmas albums this year, and Slospeak Christmas, Volume 1 is a good addition to that list. A great mix of artists, and a boatload of talent make up the tracklist. I like that Volume 1 at the end; here's hoping to more Christmas cheer from Slospeak next year as well.