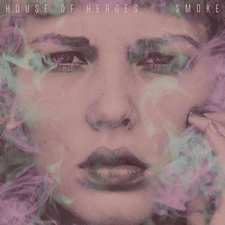 To any music listener worth their salt, House of Heroes are A-listers, in skill if not in reputation. An impressive discography backed up by an enthralling live show have led to a faithful following, and HOH fits the bill squarely. It's all the more reason, then, for the band to strike out on their own for a change after a long tenure on Gotee Records. Smoke EP is their first order of business as a newly-unsigned band, and it's everything fans could expect.

From the beginning, it's clear that the production quality hasn't suffered in the least, as the fun starts immediately with "Bottle Rocket." It's a blistering opener with Tim Skipper's vocals soaring high and a novel organ sound thrown in for good measure. This is followed up by "The Worst Kind of gods," a proclamation of human depravity ("Slaves to our selfish hearts that always want/I am not a good man/it's good I seek to do"), and "Wake Up Screaming" and "Satisfied" serve as valid reminders of life's brevity and value.

The EP's finest inclusion is surely "A Fire Only We Know," featuring guitar work somewhat reminiscent of The Beatles hit "Here Comes the Sun." It's a modern ballad that showcases the depth House of Heroes can bring to their work while maintaining stunning simplicity; pensive lyrics like "there's a bravery inside me still clinging to my clothes/like smoke from a fire only we know" have become trademark for this band, which is only a good thing. "Infinite" closes the album on a Suburba-esque note, contrasting the urgency of "Satisfied" with the carefree spirit of enjoying life "riding in your brother's Camero."

And EP like this one is a tricky one to compare to previous work, as it neither continues any obvious creative concept nor lays any new groundwork. It's hard to say if any of these tracks would have fit in well with any of their previous albums, but at face value, they're enjoyable and make a cohesive whole for the EP's purposes. At the risk of sounding flippant, Smoke EP is simply six new House of Heroes songs in one place to hold fans over until their next big project. Still, it's a stellar six tracks, and it's another reminder of how talented these rockers are in the grand scheme of their scene.

Perhaps the best news is that Smoke EP is available to anyone who contributes to the band's IndieGogo campaign for their upcoming concept album, so it's absolutely worth the investment. Smoke doesn't deviate from the House of Heroes norm too much, but it's a fulfilling listen that ends the summer with bliss.

It's just undeniable: House of Heroes is one of the best things to ever happen to modern rock music. Why they receive no recognition outside of the Christian market is beyond me. But I digress...

Now that House of Heroes has left their longtime home Gotee Records, they've decided to go about giving fans a smorgasboard of new music. The appetizer for their upcoming full-length record (which has obviously been overly-funded already via IndieGoGo) is the six-song Smoke EP. Opening is the engaging "Bottle Rocket," which is the signature rock anthem House of Heroes has come to do with excellence. "The Worst Kind of gods" follows, featuring a song structure that reminds me of several songs from their first album, Say No More. There are also slight hints of Cold Hard Want and Suburba in "Wake Up Screaming" and "Infinite," respectively. This is a band that knows how to evolve and make each new album something new, but still hold on to what makes them who they are. So instead of "Oh, this song sounds like another song," it's reminiscent and happy. Perhaps my favorite song is "A Fire Only We Know." It's the most experimental of the bunch, with non-overwhelming electronic music in the background, and a smooth rhythm and beat. The guitar work is also delightful as Tim Skipper sings, "There's a bravery inside me still clinging to my clothes like smoke from a fire only we know." House of Heroes' Smoke EP is another solid entry into the powerhouse's discography, and a grand re-introduction to the independent music scene. Pick up a copy of this EP (which you can do by contributing to their campaign or by buying it from online retailers) and get ready to be blown away by their upcoming concept album. - Review date: 8/14/14, Scott Fryberger