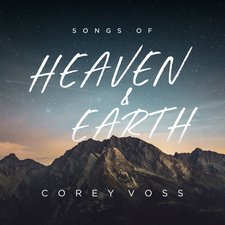 
Joining the every growing ranks of worship albums hitting the market in 2015 with independent project How Great, Corey Voss has written with some of the genre's finest, like Paul Baloche, Michael Farren (Pocket Full of Rocks), pop singer Lauren Daigle, and the writer of "Revelation Song" Jennie Lee Riddle. Based out of Gateway Church in Shelbyville, Tennessee, Voss serves as the Worship & Creative Arts Pastor while appearing as a member of the All About Worship Collective, as well as the People & Songs Community. Providing a sneak peak with five song EP, titled Songs of Heaven & Earth Vol. 1 in July of 2017, he adds five additional cuts to round out the collection with this release, simply titled Songs of Heaven & Earth.

With the glut of worship projects, collectives, and church worship teams releasing new music every week, the question is what does worship leader Corey Voss bring to the table? With all the options for listeners to choose from, artists need to stand out in at least one of two ways: either bringing something new, or doing something already done excellently. After several listens, it is the opinion of this reviewer that Voss doesn't necessarily bring anything new to the scene, but he does have a few highlight songs worthy of your attention.

One thing that can be said is that, aside from occasional applause, it can be easily forgotten that this is a live album with its studio-like sound quality. Also, Voss remedies one of the biggest downsides of the EP by adding a few more upbeat songs to the set list and sprinkling them into the sequencing, better balancing the fast/slow dynamic. Corey does the uptempo songs like "The King Is Here," "Nothing Is Impossible," and "Lift Oh Gates" well, but they do little to stand out from his contemporaries. His real strengths are writing fantastic verses of the contemplative variety, and then offering choruses with great sing-ability. One example is the album's best matching of melody and lyrics in slow song "Don't Ever Let Me Go." Aside from the somewhat awkward rhyme scheme in verse two where he sings, "can you drown it in the deepest sea?/can you cast it far as west from east?," it really is a great song reminding the listener of the finished work of Christ for the believer. Another example of his slow-song writing prowess is album closer "You Promised," where we hear him sing over the swells of a keyboard and violin, "everything is temporary/God you're never-ending/though it seems you sometimes hide/you rise in perfect time." Other song highlights are the previously released "Praise The King" and the vertical praise of lyrics "He is not surprised/He surrounds/He cannot be stopped/He astounds/He is drawing near/oh hear the sound" in song "God Who Moves The Mountains."

Not innovative, but praiseworthy nonetheless, Corey Voss is one to be watched going forward as he has a clear ability to write accessible congregational songs. Songs of Heaven & Earth is a definite recommend for fans of Hillsong United, Phil Wickham, Bethel Music, and Elevation Worship, as they will find much to enjoy. For worship leaders, the must-add songs to introduce to your congregations are "Praise The King" and "Nothing Is Impossible." Here's hoping that there is much more to come from worship leader Corey Voss.