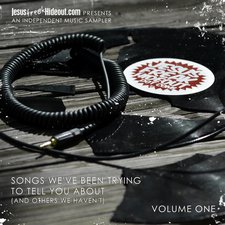 Various Artists
Songs We've Been Trying To Tell You About (And Others We Haven't), Volume One

It would not be a stretch to say that I am a prime (if not extreme) example of the intended audience to this sampler, Songs We've Been Trying To Tell You About (And Others We Haven't), Volume One. And the thing that attracted me is the thing that doubtlessly attracted anyone who downloaded it: 37 free songs from a huge variety of different musical styles and artists ranging from new and unknown to established and well-known. Rap, metal, AC, Hip-Hop, indie, rock, pop, ska, and even spoken verse are all represented. For those who download this who have heard of very few of the artists included in this sampler (myself included), it is almost impossible not to find something that draws them. In fact, not long after I downloaded this monster sampler, I downloaded the albums of several of the artists included (and wish I would get more, but am too cheap to do so).

Now, one of the things about a sampler like this is that, considering its length, it is not something that someone just sits down to and listens the whole thing through. People naturally will have their favorites and jump and skip around, put it on shuffle on their iPods, or create a playlist with these songs, and so on. And some, of course, purchase the albums of those that they like the best. The selections that stood out the most for me were "Masters of Flattery" from SONS, that quirky acoustic rendition of Family Force 5's "Fever," Sarah Kelly's chilling "Midnight Sun," Aaron Newberry's painful dialogue "Apology," and the very ironic and thought-provoking "I've Got a Friend in Money" from The Spoken Nerd. There are some other very well-deserving tracks that are worth mentioning, but it would take much longer here than reasonably allowed to give each excellent track their due. But I do have to give a shout-out to the spoken word inclusion on the album, Levi the Poet's "Kaleidoscope." Levi the Poet, performing with no musical accompaniment at all, tells the story of a girl from a broken home with a broken life with such passion that, while undoubtedly many may be annoyed and uncomfortable by what they might call his "over-the-top-ness," the tremendous power of his delivery made my heart just about leap out of my chest. Spoken word is something that is either loved or hated, but there is no denying the passion of this track.

Naturally, along with all the outstanding tracks, there are some downers too. Most notable was the bland and uninteresting "Barriers" from Owen Pye. Of all the tracks, this one was my least favorite, and I really do wonder how it got on here. Other misses and near misses include The Great Transparency's "Fireworks," which is a rock song that sounds like a lot of other rock songs I have heard before, and VOTA's "Learning to Dream," which sounds too radio-friendly for a collection like this (though still a decent song). And, of course, there are songs that are in genres that are not necessarily the cup-of-tea for the listener (I, for example, being someone who likes to understand a song's lyrics, don't have a huge affinity for many varieties of hardcore, so naturally my interest in a song like Fallstar's "Hunters" wasn't as great, although still I liked the music). But, again, the variety is so great that it is almost impossible not to find something you don't like (and, conversely, something you do). Any cons for quality on this sampler are easily overshadowed by the collective pros in the quantity (I mean, 37 songs!?!).

In short, if anyone seriously notices this sampler, you have got to be nuts not to download this. It is free, high quality music from relatively unknown and/or independent artists that almost certainly include someone that you are going to fall in love with (figuratively). AND, it even includes some fantastic treats, such as the reunited OC Supertone's song "On the Downbeat" (which will presumably be released on their yet-untitled upcoming new album), and songs that aren't likely to be found anywhere else, like the rough demo of "When I Saw You" from Lights Go Down or the unmastered "Electric Truth" from Kids in the Way. The title of this sampler is even exciting, as it ends with that ever-so-tantilizing postscript "Volume 1," implying that there will be more of these monster releases from the girls and boys of JFH. Whenever that time comes that Volumes 2, 3, 4, 10, 30, or 100 are released, I will no sooner take a breath than click that "download" button.