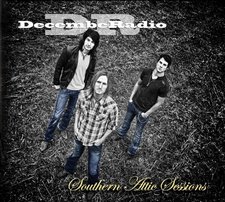 It's been almost three years since Virginia southern rock band DecembeRadio released new material. Last year, fans were able to sink their teeth into a new live CD and DVD, but it wasn't quite the same as getting a new studio recording. The band, now a trio after drummer Boone Daughdrill's exit, has just self-released (with distribution through EMI CMG) a new five-track EP, titled Southern Attic Sessions. Their sophomore album, Satisfied, followed the sleeper success of their self-titled debut, and sided just a bit more towards the contemporary side of things after securing a hit at radio with "Find You Waiting." This EP still bears a strong DecembeRadio feel, but it captures a little bit more of the raw southern rock flavor the debut displayed, while still maintaining the band's softer side at times as well.

One thing you'll notice when listening to the self-produced and self-mixed Southern Attic Sessions, is that the production quality is pretty strong. However, if you play it alongside recordings from Satisfied, the sound quality of this EP is slightly murkier. This may actually lend a little more to the raw energy of songs like "Narrow" and "Deeper Well," which showcase Brian Bunn and Eric Miker's guitar solos deliciously. The EP opens with the anthemic Emmy Lou Harris cover "Deeper Well," which carries a feel similar to Julie Miller's "All My Tears" (which is frequently covered by Jars of Clay). Thematically, the song sets the tone for the songs that follow, speaking of seeking Christ through our darkest and loneliest times. "Son When You Feel Down" is a highlight, an acoustic-driven southern rock song that urges the listener to "Put your trust in the good Lord Jesus" when your heart is heaviest. "Be Strong" shifts tempo, continuing the acoustic sound and introducing a harmonica for the first real ballad on the EP. Like the southern pop rock group Big Tent Revival before them, DecembeRadio has never been one for really cryptic lyrics, and everything on this EP is very straight forward in its execution and easily relatable. It may come across as too simplistic for some (maybe even unimaginative), but there's something about words like "Don't be discouraged, just keep pressing on. Be strong. There's strength in weakness and life will go on. Be strong." that is comforting to hear.

Another album highlight comes in the form of southern rocker "Narrow," an update of a track from their 2005 indie album, Dangerous. A song about choosing the less popular route in life, opting for God's narrow path, the wonderfully catchy track bears a 90s rock influence that DR has often mixed into their craft, but it hardly sounds dated. The end result is a rock track with blazing guitars and an infectious sound. To close, the guys slow things down a bit for "Where I Wanna Be," a worshipful song about finding rest in Jesus' arms when we're at our weariest. It's a wonderful finish to a solid five-track EP.

It's actually unfortunate that this recording probably won't be getting the attention and distribution it deserves, as Southern Attic Sessions is a tight batch of new recordings from a truly talented bunch of guys. The song selection seems to represent DecembeRadio doing what they do best. Fans of the band won't want to miss this project, while those who enjoy Third Day's southern leanings or Needtobreathe should find something to like on here as well. Hopefully Southern Attic Sessions is just a taste of what's to come from these guys.

For the first time since late 2008, DecembeRadio fans have some new studio tracks to add to their playlists. The band doesn't disappoint with the five-track, Southern Attic Sessions EP. Their creativity was allowed to run wild this time around, as the album was produced by the band itself. The results are positive, feeling very relaxed and simple. "Deeper Well" starts things off; a solid song with an impressive, minute-long guitar solo. "Son When You Feel Down" is an acoustic track that again makes you want to applaud the excellent guitar-work. "Be Strong" is the chosen single from the EP, and it's definitely the standout track, "You've been lonely but never alone, your Savior's been there all along, just reach out your hand." This straightforward, encouraging song is one of the band's best so far. Fans of DR's heavier content will be happy with the fourth track, "Narrow," which picks up the energy. This inclusion provides a bit of variety on the EP, even if it doesn't fit naturally with the other four songs. "Where I Wanna Be" reverts to the simplicity of the first three songs as the EP comes to an end. Overall, DecembeRadio succeeds with the stripped down sound they focused on this time around. Some fans might be dissatisfied with the lack of harder rock songs, while others might not appreciate the unambiguous nature of the lyrics. Despite its few shortcomings, the EP is still a satisfying collection of southern rock goodness. - Jerold Wallace, 3/30/11