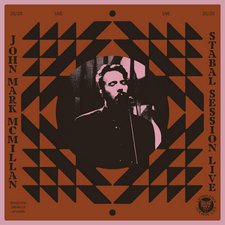 
In 2015, John Mark McMillan put out one of my favorite live albums of all time, Live at the Knight. After two more studio albums' worth of his best work yet, McMillan is back with another live offering. Recorded near the end of 2019, Stabal Session aims to capture a performance for an intimate gathering of friends and family.

While Live at the Knight was designed to give listeners the experience of a John Mark McMillan show, with the occasional monologue between songs and tracks that blend together seamlessly, Stabal Session acts as more of a live greatest hits, with minimal banter and fading between songs. We get to hear a couple of jokes and a band member introduction or two, but the songs themselves are the main focus. The album even ends quite abruptly, fading out quickly while McMillan is saying his thank-yous to the crowd. In all honesty, it feels a little underwhelming and slightly disappointing, as I know that there was more stuff happening that just got left out.

On the plus side, most of the tracklist is made up of my personal favorite songs from his repertoire, and these live renditions are as good as, if not sometimes better than, their studio counterparts. In fact, almost the entirety of the second half, from "The Road, The Rocks, and the Weeds" through the end, is hit after hit. The purely acoustic take on "Death In Reverse" is phenomenal, while the epic and triumphant "Nothing Stands Between Us" and "Death In His Grave" are still as powerful as they were on their respective albums.

How you look at this album may determine how you feel about it. As simply a live album, it leaves a bit to be desired. But as a collection of some of McMillan's best songs, it knocks it out of the park. Whether you've enjoyed McMillan's work over the last decade, or you're more of a fan of the last couple of albums, Stabal Session is worth your time.

(Reviewer's Note: this review is specifically for the basic version of the album that is available for purchase and steaming. The deluxe edition of this album does contain extra material from the show that makes it feel like more of a live experience. If you're able to snag that, you should.)