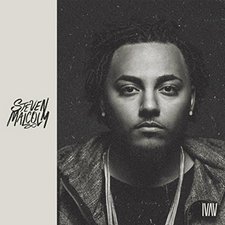 
As sad as it may be, the Christian music world is rarely the first to try a new genre or make something popular. But when something gets big in secular music, eventually some Christian artists will come out of the woodwork and try their hand at it...with mixed results. Sometimes these artists are independent and stay that way. Other times, if there's money to be made, a label will snatch them up and make that money. Lately, this has been the case with the modern style of rap and urban pop. Capitol CMG is starting to embrace it, and now it seems that Word Records is ready to give it a go--via new label imprint 4 AGAINST 5--with their latest signing, Steven Malcolm. Malcolm's self-titled national debut is an ambitious album that will surely catch the attention of many.

I used the term "mixed results" a few sentences back, and that's a fairly good description of Steven Malcolm's debut. There are tracks where he really shines as a lyricist, but they're sprinkled in between tracks that are merely designed for the mass consumption of casual music listeners. Take, for example, Malcolm's first single and album opener, "Hot Boy." Meant to express the "burning hot passion inside of your heart to really excel and be the best that God has created you to be" (according to his website), Malcolm spends the track talking about that passion and how it makes him a hot boy. "Leh Get It" explores the trap music sound with an unbearable hook that just repeats "Leh get it, leh get it" over and over again. "Vigorous" contains a vocal-heavy beat with Malcolm making lots of weird sounds after each line, while "Party in the Hills" is more upbeat and fun. Granted, it sounds like mainstream pop radio filler, a la Miley Cyrus, but I can see this having "guilty pleasure" status. My main critique of this song, though (other than the emptiness), is that it makes poor use of its guest vocalists. First, Andy Mineo is nearly indistinguishable from Malcolm, and second, Hollyn is confined to a weak hook and some vocalizing here and there. Hollyn, a new Gotee Records artist, is such a talented singer and rapper, and she could have taken the spotlight if given the chance. You can practically hear her begging to be let loose on the mic with the intensity she brought to her part of the song.

Overall, it seems the first half of the album - maybe another track or two after - is the weak portion. Tracks like "Hot Boy," "Six Four," and "Cereal" (a silly song that I really wanted to like, but just couldn't) bring very little to the table and are instantly skippable. However, "Feel Me" is a standout track from the first half of the album. In "Feel Me," Malcolm actually takes a moment to really rap, and he does so in a way that's rather rare these days: fast and skillful. "The Struggle" is a highlight of the album, and is a very relatable track about trying to live a Christian life but being caught in the world. I'm sure many listeners will really feel this track. The final track, "Never Let You Go," is also a solid track. The trap beat sounds quite a bit like the beat from "Hot Boy," but Malcolm's flow is more akin to a hip hop flow, and Blanca's vocals would be perfect if the hook wasn't just a little too repetitive. The track ends rather abruptly, but it's one of the best that Malcolm's debut has to offer.

Steven Malcolm is going to be a big name in Christian rap. Flowing in the same vein as artists like Social Club Misfits, I feel that many of his fans will be people who don't generally listen to rap or hip hop. However, this album is going to take this young man places, especially paired up with his recent run on the Winter Jam tour. I don't recommend Steven Malcolm to hip hop fans who grew up with (and still get down with) Uprok, illect, or even Lamp Mode artists. But if that doesn't describe you, and you like the modern rap stylings, Malcolm just might be your guy.

Steven Malcolm first burst onto the CHH scene in 2014 with his independent release, Monsters Ink, and now after getting signed to Word Records imprint Four Against Five, he is taking a big step in his goal to be "the Lecrae for the next generation" with his self-titled label debut. Malcolm and his team definitely know how to craft a catchy hip-hop tune. There are some bars when Malcolm's flow is very impressive (particularly in the fast-spitting "Feel Me"), but generally his delivery is casual, making it feel accessible to listeners who aren't normally fans of rap music. The beats are solid and varied in style, with "What Were You Thinking" and "Feel Me" standing out as some of the stronger productions. It's also intriguing to hear songs influenced by Malcolm's Jamaican heritage on the reggae-infused "Fire" and "Waiting Games." Unfortunately, his lyrics aren't up to par with his beats and rhyming skills. There are moments of substance throughout the album where he raps about reflecting God's light ("light us up we bring the fire straight from Zion" on Fire") and shares his struggles with sleeping around ("The Struggle"), but for the most part there is a lack of meat here (especially on earworms "Cereal," "Party in the Hills," and "Hot Boy"). Overall, this is a promising start for an up-and-coming CHH artist. Highlights include the radio-friendly "Never Let You Go," culturally relevant "Can't Take This Dream," and the aforementioned "Waiting Games." - Review date: 2/5/17, written by Christopher Smith