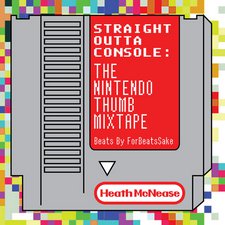 After Heath McNease's 2007 debut album with 7 Spin Music, it was three years before we heard from him again. After we did, with his two albums in May of 2010, his fans haven't stopped hearing from him. The House Always Wins dropped this past February, which fulfilled his contract with 7 Spin; subsequently, McNease decided not to re-sign and is now taking the independent route. His first act as an independent artist is to release a free mixtape. Somewhat appropriately, Independence Day was the official release date of McNease's first mixtape, Straight Outta Console: The Nintendo Thumb Mixtape.

Originally, Straight Outta Console was going to be a mixtape released solely by producer and beatmaker For Beats' Sake, and would feature a multitude of emcees all mixed up throughout all the tracks. McNease happened to be one of the emcees that FBS contacted about providing some guest vocals. Upon hearing the tracks, McNease got with FBS and both decided that McNease would take over the majority of the writing and appear on every track, with the other emcees acting as guest stars to McNease's main attraction. Now dubbed Straight Outta Console: The Nintendo Thumb Mixtape (as a tribute to McNease's most popular song, "Nintendo Thumb"), McNease took lyrical control, while all the beats stayed in FBS' control (except for "Nintendo Thumb Remix," which was done by Fab Da Eclectic). FBS did a great job making the music his own, creating different styles of hip hop using the 8-bit jams. Tracks like "Chopstlevania" and "Style Points" really feel like straight gangsta tracks, while "Tanuki" and "LATFH" sound like true McNease hip hop songs (I also like the really fun beat of "Mmm...Donuts!" It's the kind of beat that you could picture Pigeon John rapping over, though he doesn't appear on the list).

What's great about this mixtape is that it's very clear that everyone involved was devoted to making this as authentic of a mixtape as it can be. While all the tracks are very different from each other, a lot of them flow seamlessly, one right into the next. There are also lots of samples used from different movies and games. "Bonesaw's Ready" uses the infamous line from the late Macho Man Randy Savage in Spider-Man ("Booooonesaw's ready!"). "Tanuki" throws in a ton of different Mario sound effects (other than the obvious Super Mario Bros. 3 music backdrop), spanning from the first Super Mario Bros. to Super Mario 64 (possibly even more). There's also a little bit of obscurity here and there, like a segment from an 80s film called The Wizard at the end of "Bomberman." Another mixtape aspect is that a couple of the tracks lack a hook, but just feature the emcee(s) flowing straight through the track. "Chopstlevania" features McNease at the top of his game, with quick lyricism, followed by the impeccable RedCloud making an appearance as well. McNease busts through "40 Hard Bars" on his own and tears it up, while Deepspace 5 members Sev Statik and Freddie Bruno team up for "The Day My Bars Dropped."

There's certainly no shortage of talent available on this mixtape. In addition to the talent held by both McNease and FBS, Davey Rockit provides all the cuts and samples you'll hear. I can safely say I've never heard 8-bit noises getting the scratch treatment, but Rockit does it several times throughout, and it sounds great every time. He's also responsible for all the samples added into the tracks. Other talent is the large guest list of emcees that show up here and there. I mentioned the spots from RedCloud, Sev Statik and Fred B, but we also hear from Playdough twice ("Konami Kode" first, then along with Manchild in "Style Points"), the team of the Scribbling Idiot Cas Metah and the DS5 member Sivion in "Toads Magoats," Okwerdz in "Glass Joe vs Gabby Jay" and a surprising appearance by KJ-52 in "Nintendo Thumb remix." Every guest spot seems to have been perfectly selected, with the emcees representing their respective tracks very well. Whether it's RedCloud and Okwerdz spitting fast or Cas Metah's and Sev Statik's deep vocals going all gangster on their tracks, I couldn't picture better placement for each of them. I'm not as much a fan of KJ as I am the others, but even his parts in his track are well-done.

The lyrics and flows McNease brings to the table here show why they call him McNasty; his style is sick. Though I'm not 100% certain on this, it feels like some of his verses came into being as freestyles. Verses in "Tanuki," "First Person Shooter," "Mayor McCheese" and several others are great examples. The majority of the time, it feels like McNease was rather intentional about the overall vocal style. As far as lyrical themes, they are (not surprisingly) about video games a lot. Some of the tracks are about the game that was used to create that respective track's beat ("Tanuki" is about the Super Mario Bros. franchise and uses Super Mario Bros. 3 music; "Mmm...Donuts!" is made from Krusty's Fun House music and talks about The Simpsons; "Glass Joe vs Gabby Jay" uses music and audience noises from Mike Tyson's Punchout! and makes mention of fighting just about all the characters from the game - and gives away the code to the final fight at the end!). Some of the tracks make references to games that may or may not have been used elsewhere on the mixtape ("The Day My Bars Dropped" uses music from Super Donkey Kong, but is a clever reference to the game Tetris, which is used later for the remix of "Nintendo Thumb," while "Konami Kode" uses music from Darkwing Duck, but is all about the game Contra). I like that "Mmm...Donuts!" not only talks about The Simpsons, but in the last verse, he goes on the offense against Christians that are more Pharisee-like than Christ-like ("And that's how people say that Christians are amateurs with their rigid parameters eating six of their hamburgers then insist that the chancellor be a biblical panderer then they flip and they slander him when he gets to philandering."

The team of Heath McNease and For Beats' Sake is excellent. FBS is a terrific beatmaker who can produce some of the best and most authentic hip hop beats around. Even with 8-bit original Nintendo music, he takes it and twists it into something he can really call his own (to an extent). We've seen his work with Playdough on last year's Writer Dye, and he didn't disappoint with McNease this time around. If he does another mixtape anytime soon, I'll be sure to check it out. As far as McNease is concerned, his skill is still something to behold amongst hip hop fans. He can flow with the best of them, he can make you think, and he can also just chill and have a good time (the latter of which is what you get most of on Straight Outta Console). His mix of versatility and a plethora of pop culture references makes for a truly unique experience. He flexes his skill all over the mixtape, and he's on his game the whole time. Lyrically, some may be offended by some of the liberties he has taken in his newly-found independent artist status. Some near cuss words from him and a couple of the guests may hit some listeners' ears the wrong way, but they never actually drop any full cuss words, so you don't have to worry about that. Also, in "LATFH," which I believe stands for "look at this freakin' hipster," McNease satirizes the hipster culture, and raps from the perspective of an (excuse the ironic terminology) "uber-hipster." So the things he says, such as "pwning" some Captain Morgan or wanting a band's frontwoman to be topless onstage, aren't McNease, but rather the hipster he's rapping as. It threw me off at first, but on my second listen-through, I paid closer attention and realized what he was doing.

Straight Outta Console: The Nintendo Thumb Mixtape is available as a free download through McNease's Bandcamp store. He has a space to donate if you feel so inclined as well. It's not required, but it's worth some extra cash if you're able to. Otherwise, just download it and enjoy some great hip hop music. From the sounds of it, there just might be more mixtapes like this in the future. A Super Nintendo or Sega Genesis mixtape would be fantastic. Until then, get these tracks stuck in your head. It's bound to happen.