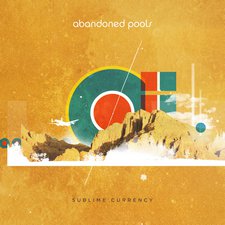 Earlier this year, Tooth & Nail was slated to release an album from one of its newest artists, Abandoned Pools. For reasons unknown (and probably not relevant to anyone not directly associated with the inner workings of T&N), Sublime Currency was pushed back a few months to its official release date of August 28. But it's here now, and it's a nice surprise for those who have become disenchanted with the label's current line up.

Sublime Currency is one of those albums where you can listen to the first song (in this case, the title track) and not really know how to classify the artist. What's interesting - and one of my favorite things about Sublime Currency - is that, not only do most of the songs sound pretty different from each other, but a lot of the time, the songs themselves will have a couple different sounds mashed together. For instance, "Sublime Currency" takes cues from Joy Electric and Queen with a catchy electronic rock feel, but then "Hype Is The Enemy" comes on and turns it into a modernized new wave sound. Imagine Copeland and New Order fusing into one band and you've got somewhat of an idea.

Now, if you want to hear what an Abandoned Pools rock song sounds like, you can try "9 Billion," which has some industrial leanings in the verses, and an odd combination of solid rock music and eerie, almost haunting strings that at first don't seem to fit. But after processing it all, it becomes rather easy to appreciate it. The following song, "Autopilot," is a beautifully contrasting song that brings the album's pace back down with soft and slow acoustic guitars heading up the first half of the song. It does pick up halfway through, but to nothing more than what you might hear from a band like Snow Patrol. Sublime Currency also features one duet, and it really deserves a mention here. It's called "From Long Sleep," and the guest vocalist isn't a singer you would be familiar with unless you went to church with the two singers. Her name is Paris Carney, and her voice fits in with other singers like the Eisley sisters and Audrey Assad. Tommy Walter and Paris Carney take turns for the first couple of verses, and they each sing their own chorus, but when the two sing their portions simultaneously near the end, it's wonderful. The arrangement is fantastic and they sound perfect together. It's a highlight of the album for sure.

For those unaware, Abandoned Pools is actually a one-man band; Tommy Walter is the man responsible for what you hear here. The one-man band is quite common in the music industry, but it's a little rare to find one that offers up such diversity in the music. Whether this diversity is purposeful or just the sum of his different tastes in music is unclear (and honestly, it feels to me like it's a little bit of both), but regardless, it's certainly welcome, and it only makes the end result that much better. It's not confined to a specific genre; it's pop, it's alternative, it's rock, it's new wave, it's just a little bit of a lot of things ("In Shadows" even closes us out with some reggae-style steel drums). And it all works together so magnificently.

To say that Sublime Currency is a pleasant surprise is a bit of an understatement. I mean, it definitely is just that, but I'm impressed with just how good of an album it is. Yes, it harkens back to the (relatively) old days of Tooth & Nail when bands like Mae, Copeland, Poor Old Lu and Starflyer 59 reigned supreme, but it's also a progressive step forward for the label and also for the musical career of Walter and Abandoned Pools (who I had never heard of until now, despite his previous albums on Warner, Reprise, and Universal). I don't think I have to say it, but this album comes with my recommendation.