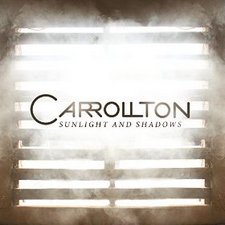 
Back in the days before iTunes and MP3ss, before Spotify and Amazon Prime, if you really liked a song that you heard somewhere, you had to make the sometimes difficult choice of buying the entire album in one format or another. Many record collections are littered with albums bought for that one great song (as if the artist who created that song was not capable of writing another one that you might like just as well if given the chance).

Carrollton, a Centricity Music artist with just one EP to its name, has that kind of song in "Let Love Win", a soulful and soaring gospel number that immediately seizes the ears and heart with a great big, rousing chorus and a plea for believers to lay down their weapons and let love win. When the gospel choir-like background vocals kick in (a careful listen will reveal the familiar husky alto voice of Bethany Cruz at the end of the song, it's a spine-tingling moment that heralds the arrival of a group of great songwriters. Lead singer Justin Mosteller turns in one of his finest vocals, and the whole affair brings to mind Needtobreathe's finest early moments.

That is not to say that the Sunlight And Shadows EP doesn't have other great moments. Opening track "More Now" is a polished, epic number that takes flight with a crashing chorus and honest and adept lyrics like the "illusion of my control has been shattered and replaced with a hunger deep in my soul and a child-like faith." Statements of belief are a cornerstone of CCM since the beginning, but "More Now" tweaks the formula just a little to produce an inspiring song of conviction that doesn't surrender to clichés. "Meant To Be" shuffles along on a simple country music path, and "Tell Me" builds to a nice, anthemic ending. "Holding On To You" shows the southern roots of the band with a bit of twang and old-timey handclaps.

It's not clear why the record label decided to go with another EP instead of issuing a full-length album. The three bonus tracks here (cleverly titled "The Jetlag Sessions") are each quality songs that would have benefited from the full studio treatment. The wheezing harmonica in "Withered" is a nice touch and the four-part harmony and slow, acoustic vibe on "Open Wide" is pure bliss.

Not many bands come into the world fully formed, and Carrollton, with just two EP's to their credit (and a previous history under the moniker Mosteller), is showing signs of real growth on Sunlight And Shadows. Here is hoping that this trend continues on an anticipated full-length project.