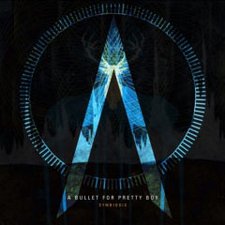 A Bullet For Pretty Boy
Symbiosis

"Symbiosis" can be defined as "the living together in more or less intimate association or close union of two dissimilar organisms" [Merriam-Webster]. It's actually a pretty good way to describe our relationship with God and is also the title of the new album by metalcore act A Bullet for Pretty Boy. ABFPB is signed to the Artery Recordings division Razor & Tie and have seen some significant exposure as of late; they even landed a spot on the Scream the Prayer Tour with Demon Hunter this year. Symbiosis is probably the heaviest album to date for the band and also features the most musical experimentation from the Texas natives.

Upon first listen, and some honest pre-conceived notions, the album sounded like your typical über-produced metalcore record filled with generic guitar riffs and computerized (or at least computer-corrected) double bass. After getting into the songs further though, a little more was revealed. ABFPB used your typical metalcore sound and mixed in an atmospheric feel. It's not the new wave trend of throwing in a ton of ambience either, but the extra sound, and effort, definitely adds an unexpected depth to the music.

"Red Medic" kicks the album off positively with the normal metalcore battle of screamed and clean vocals, but you also get a small taste of the atmosphere mentioned earlier. The track is the album's first single and is a personal message of singer Danon Saylor as meeting God pulled him out of a deep depression. The album is full of seamless transitions from the heavier to softer sections of the songs. Perhaps the greatest example is the transition at the end of "White Noise" into the atmospheric track "Illumination." It's really hard to call it an instrumental, but there are no lyrics. It features the same looped keyboard line, drums, background vocals (basically, "oooh"), some other effects, and ambient swells towards the end. While, in theory, it takes away from the album's only ten songs, there is something entrancing about it that makes it extremely difficult to hit the skip button. The transition is completed as "Illumination" fades out and into the heaviest tune, "Grateful Prey." The song features only screamed vocals and is Saylor's testimony. The final mention goes to the final track, "Self-Disclosure". In contrast to "Grateful Prey," "Self-Disclosure is the record's softest song. The song is basically Saylor's side of a conversation he had with God as he says, "Shelter me, Lord; I haven't let go. It's times like these that I seem to reach out. You are the guide I've been asking for." The song continues on in an almost worshipful state; even with the screamed vocals that come later.

While it's true that the meat of the music on Symbiosis is cookie-cutter metalcore, the guys from A Bullet for Pretty Boy made a concerted effort to strive for something more. Guitarist Chris Johnston sums up their efforts by saying, "We just wanted to make a record that we really liked. We didn't have in mind what was really popular or what we thought kids would like. When we look back at this record ten years from now, we wanted it to be something we enjoyed, not something we made for the scene." Metalcore fans should definitely get some enjoyment out of Symbiosis, but songs like "Red Medic," "Come Clean," "White Noise," "Grateful Prey" and especially "Self-Disclosure" may win over other fans of heavy music. It's not the best metalcore album, but it has surprising replay value and should provide plenty of enjoyment for one looking to consume some new metalcore.