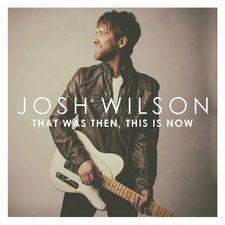 Josh Wilson
That Was Then, This Is Now


After a decade of delivering solid CCM albums, Josh Wilson comes to the table bearing his latest offering, That Was Then, This Is Now. This most recent endeavor sees Wilson formulate an intimate and personal worship experience while remaining accessible and relaxed.

The album opens up with the title track, a rather upbeat and fast-paced song which serves to set That Was Then, This Is Now's lyrical theme in place. The next couple of tracks, "This is the Day" and "No More" seem to be filler songs, which are decent, but somewhat generic.

The album's quality greatly picks up on "The Songs I Need to Hear," where Wilson offers an unusually honest portrayal of himself as an artist. In an industry where every cut is meticulously wound to fit into a carefully-crafted image, Wilson breaks through the noise for about two-and-a-half-minutes when he sings "I'm so sorry if I've ever written a line which sounded trite or just not true / I promise it was never my intention / to act like I know what you're going through / I cannot assume I know what to sing for you / I only write the songs I need to hear."

"Blown Away" and "Say Yes" are solid CCM tracks, and his beautiful instrumental cover of "Ode to Joy" is central to the album's structure. "House Divided" is probably the best track on the album with Wilson entering more into his own style. It feels oddly reminiscent of the Newsboys, circa 2005, which only adds to its strengths, along with the whistling effects and sharp lyrics: "I've never understood the folks that think we're good / whenever we are left to our desires / Oh, the way I see it is / alone, we are adrift / in an ocean in a boat we set on fire." The ninth track, "Don't Let Go," continues to bolster the album with Wilson falling into his comfort zone, presenting a somber and reflective piece which easily grabs the number two best slot on That Was Then, This Is Now. "Coming Home" is a good song, but contains nothing particularly fantastic or surprising. However, closing track "Grace Upon Grace" again returns Wilson to his form with a sound similar to "Savior Please." The song could be better, but it gets the job done and works well as a send-off.

Many of Wilson's lyrics are borrowed from older hymns or well-known "Christianese." This is not a bad device by any means, but when coupled with the melodic similarities he has in common with his contemporaries, the originality begins to suffer. The first couple of tracks seem to borrow heavily from forms set in place by Matthew West and Mat Kearney, respectively, while some of the other songs struggle to differentiate from other CCM artists, such as Mikeschair or The Afters. Ultimately, Josh Wilson has crafted a very good album, albeit one that fails to set itself apart. The diversity of That Was Then, This Is Now is somewhat less defined than some of his previous works, such as Trying to Fit the Ocean in a Cup. For older fans, this likely will not be considered his best album, but should still be acceptable. For new listeners, picking up Wilson's earlier works would probably still be the best place to start.

Whatever else you choose to call Arkansas native Josh Wilson, you have to hand it to him: he's an eternal optimist. Indeed, doubters need look only as far as infectiously breezy, positively-inclined offerings like "What A Mystery" and "Pushing Back the Dark" from his last album for proof. Taking over where those tracks left off, the title song and "This Is the Day" kick off Wilson's latest record with an ingratiatingly invigorating one-two punch that rivals even the most sun-drenched moments on his previous record. Not content to run that sugary-sweet groove into the ground, Wilson wisely complements such shimmering pop ditties with gritty, all-out rock numbers ("House Divided"), simmering neo-soul pieces ("Don't Let Go"), and sparkling acoustically-based instrumental works ("Ode to Joy") - the last of which should silence anyone who up to this point has doubted the stories they've heard about his amazing fret-based proficiency.

Elsewhere, however, and perhaps inevitably, Wilson makes the nod toward radio-ready adult contemporary fare on offerings such as "No More," "Coming Home" and "The Songs I Need to Hear." To their credit, the songs are hardly unbearable, and Wilson pulls off this sort of pop/worship far better than most. Placed next to the new record's more spirited material, though, their relative lifelessness is only brought into that much sharper focus. Wilson is an undeniable vocal and instrumental talent and his new album has much to recommend it to both newcomers and the already-converted alike. One can't help but wonder, though, what the intrepid singer/songwriter could accomplish if he were to toss caution - and that which the average radio listener and worship leader are hankering for - to the wind and release that non-stop blistering, soul-filled rock and roll album that he almost surely has inside of him. - Review date: 8/4/15, written by Bert Gangl of Jesusfreakhideout.com