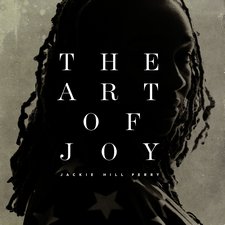 Female emcees are a rare thing; rarer still is the female emcee who actually makes an impression. Missy Elliot and Lauryn Hill are two of the biggest names that meet those qualifications. And in the world of Gospel hip hop, Elsie and Zane from Tunnel Rats are good examples. In 2014, there's a new woman grabbing hold of the microphone, and her name is Jackie Hill Perry. Getting her start as a spoken word artist, she's also taken to hip hop music, and is getting her hip hop ministry started with The Art of Joy, courtesy of Humble Beast.

(Of course, much more than simply being a new female rapper, Perry is a born-again Christian with an amazing testimony who also shows considerable skill on the microphone, even having more skill than most male secular rappers. Drowning in sexual lust and homosexual desire since a very young age, Perry is very bold about what Jesus has done for her. And her love for her Savior and the places from where He's brought her really shine through on this album.)

A lot of The Art of Joy focuses on what's wrong with the world and, for that matter, the Church (more specifically, those who profess it but don't live it). "Educated Fool," with its pleasant, The Roots-esque beat and additions by Braille in the hook, brings it back to the beginning with Adam and Eve. While different people have different views on how to interpret Scripture, Perry's idea of the fall of man is right on the money. Perry says "We're following our role model Eve, when she found that apple attractive, it wasn't apples she was after, it was the satisfaction of wisdom from other masters, as soon as she got it, she straight forsook what she was after, her heart forever empty 'cause the crook became the captain." "Miss Fearful" is a heart-wrenching tale about a girl with deeply-rooted trust issues who never seems to be able to break free from it. Perry remains hopeful in the hook, but it's a painful reminder that there are lost people in need of prayer and continual, Godly compassion. A song with a similar sort of message, although intertwined with somewhat of a different (and more personal to Perry) message is the track "Ode To Lauryn." It literally is an ode to Lauryn Hill (going as far as having a Fugees vibe, and even throwing in an "Ooh la la la, that's the way that we rock when we're doing our thing" as heard in the Fugees track "Ooh La La La"), as Perry talks to Hill a lot about not only Hill's effect on her own life, but also the noticeable visual and audible transformation that Hill went through in her musical career. Lauryn Hill had an impact on many urban pop and hip hop singers (as well as those outside of those categories), and Perry is no different. But as Hill started to become worn out by life and, as the song suggests, possibly some bad religion, it became noticeable that she was lacking joy. Perry sends this song out as a tribute to this legend, and finishes by saying "Peace will find you when you seek Him, in the meantime I'm praying for you, you're a legend, hope to see you in Heaven, Lauryn."

The first single that was released from The Art of Joy was one called "The Problem" (which, interestingly, is actually included as a hidden track after "The Solution"). It's a fiery track where Perry spits hard as she lays out a lot of the problems that are facing our society today. "The Solution" does a little bit of the same, but from more of a personal perspective. Perry and the guest emcee, Eshon Burgundy, speak about their history as they battled with addictions and living in a world full of violence and drugs. However, "The Solution" has a very hopeful chorus, as Burgundy wonderfully sings "I overcame that novocaine, I was numb to the shots from that gun, I was living so ashamed, oh I'm so ashamed, but I'm done living life on the run forever, the moment you realize that this is realer than it seems, wish you could open your eyes and realize it's all a dream." Several of the songs, like "The Solution," point out both the problem as well as the solution. "Dead Preacher," sadly, is an all-too-true example of many churches, particularly in the prosperity Gospel movement. Perry raps from the perspective of the titular dead preacher (as a male), whose main goal on Sunday mornings is to find and exploit any Scripture possible in order to bring in more riches for himself (I'm not sure of whether or not this is an actual sample, but after the first verse, you can hear a preacher saying "Will a man rob God? God wants to give you a money anointing, amen? So bring the tithe into the storehouse," followed by the sound of someone counting money). He keeps hearing from God ("You remind me of Baalim"), but keeps shrugging it off, until He's had enough, and the preacher finally has a real experience with Him.

"I Just Wanna Get There" has a poppier beat behind it, complete with some Stellar Kart-like guitars (albeit as a slower pace) at some points, as well as a good look at the transformation of Perry's mind. At one point, she speaks about her pregnancy, and in bold terms reveals that it wasn't a planned pregnancy (as it happened within weeks of her marriage), but she also clarifies the fact that she knows that it's a gift from God. I'm particularly fond of the following excerpt from this song: "We're just pottery, the joy is that the clay is shaped by grace, and the Potter promised me that everything will work for good." The album finale and title track brings back some more of The Roots-inspired beats. Lyrically, the song is a fitting conclusion, as it brings everything back to the idea of joy, and that the only source of our happiness and satisfaction is the Lord ("Satisfaction only happens to those who are glad in You, glad in You"). I love the piano in the hook, with its almost offbeat rhythm, as well as the very subtle horns that accompany it (whether they're synthetic or not, they still make a great addition).

Jackie Hill Perry's album was a bit of a surprise, as she's so new to the Humble Beast family, but it's a wonderful surprise nonetheless. The Art of Joy is a great way to introduce this talented woman of God to an already excited fanbase. The music is strong, the messages glorify our risen King, and to top it off, the flows establish Perry as a certified emcee. She even includes a spoken word piece called "Suffering Servant," though I was never really into her poetry. However, personal opinions aside, you should definitely give it a listen and it just might touch you as well. Perry's transformation is a controversial one by today's "standards," but a powerful one regardless, and her testimony is sure to inspire many who are having struggles similar to her own. Make sure to pick up a copy of The Art of Joy, and pick up a copy for anyone you know who likes hip hop and could use an encouraging word.