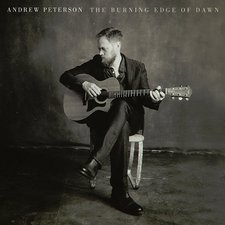 
Andrew Peterson ended his (arguably) breakthrough album Light For The Lost Boy with a song that was probably one of the defining achievements in all of recent Christian music in "Don't You Want To Thank Someone." The 10-minute behemoth captivated listeners' attention for the song's entirety, not just because of the unique bassline, but also because it so beautifully captured love and longing within a suffering world (which was a bit of a change from the rest of the album's theme of nostalgia and lost innocence). This is purely speculation on the part of this reviewer, but I would not be surprised if that song played some role in deciding Peterson's direction for the follow-up to his crowning achievement. However, this is not necessarily because he created another epic and atmospheric masterpiece to follow up his previous one; in fact, he didn't. Instead, he chose to spend forty minutes musing on life's darkness and the patient longing for the light to return. Thus, Peterson has presented us with perfectly titled The Burning Edge of Dawn.

Personal musings are nothing new for Peterson, though he probably has not attempted an album as personally transparent as this since 2003's Love & Thunder. That is likely because he entered the studio to make an album with only one finished song. While that phenomenon is no strange occurrence for many experienced artists, this forced Peterson into a corner; either come up with some songs quickly, or bust. Needless to say, he rose to the occasion. Like many great songwriters, Peterson has a real talent to take seemingly innocuous events and turn them into something profound. "Every Star Is A Burning Flame" seems to have been such a song, mentioning trimming vines and a walk down the street as inspirations. He also penned poignant odes to beloved people in his life in "Be Kind To Yourself" and "We Will Survive."

But perhaps the biggest draw of Peterson, from a lyrical standpoint, is how he can so easily write something with obvious depth without being overly cryptic. I mean, look at these titles: "Every Star Is A Burning Flame," "Be Kind To Yourself," "I Want To Say I'm Sorry," or "The Power of a Great Affection." It was this down-to-earth approach that made C.S. Lewis a household name, and yet it seems so rare for artists to do it well. And so few do it as well as Peterson.

In particular, "The Rain Keeps Falling" leaps forward as a remarkable achievement; it is a song that spews despair liberally, as if whatever good he tries to offer is constantly washed away by the downpour. At one point, he even admits of his career in music that he is "tired of this game, of these songs, of the rote," only to say on the next line "I'm already ashamed of the line I just wrote." But it would not be much of a song (much less an Andrew Peterson song) without a glimmer of hope, and that is delivered thanks to the brief-yet-instrumental appearance of Ellie Holcomb singing a mere three words; "Peace, be still."

From a musical standpoint, one is tempted to say that The Burning Edge of Dawn is more ordinary than not. Most of us have become familiar with the approach of the singer-songwriter to craft a melody on the guitar or the piano and either leave it stripped down to its bare minimum or add other elements (usually strings) for emotional pull. This is where The Burning Edge of Dawn falls short (but not woefully short) of Light For The Lost Boy, which had the look and feel of an album written by a full band for a full band while maintaining the beloved singer-songwriter lyrical approach. But faulting Peterson for this is like faulting the original Star Wars for sticking to a basic underdog storyline and traditional character types; it is done so well that it has basically become the premier example of these tropes.

At first, one almost has to be disappointed by a seemingly unambitious project like The Burning Edge of Dawn from an artist as talented as Andrew Peterson. But only almost. While I must admit that I was thoroughly unimpressed with my first listens, it took very little time to get over that hump. After all, why would an artist like Andrew Peterson feel obligated to needlessly up the ante when he can create something totally different and still excellent? Once one gets over that initial reaction that they aren't getting a project as ambitious and absurdly good as Light For The Lost Boy, they are in for a real treat.

Many a fan of Andrew Peterson are pleased with the songwriter's ability to write original songs that weave a beautiful story. No doubt, he continues that bard-like style alive and well with his latest release, The Burning Edge of Dawn, yet this time it feels ultra low-key. Nothing is wrong with that, it's just not going anywhere in a hurry. "The Dark Before the Dawn" begins the album with a methodical sound that is reminiscent of something Plankeye would have put on their album Relocation. Musically, it's fantastic but lyrically doesn't sink in until after a few listens - but when it hits, it hits hard. The same can be said of much of the album. Songs like "Every Star is a Burning Flame," "I Want To Say I'm Sorry" and "The Power of a Great Affection" carry a deeply intimate and personal sentiment but become more and more relatable with each listen. An excellent highlight is "We Will Survive" as it has a hypnotic ebb and flow to the music that complements Peterson's vocals eloquently and harkens to an Appalachian sound. However, without a doubt the standout track is the sobering "The Rain Keeps Falling." Listeners who have ever experienced depression, sadness or tragedy can find part of their soul played out musically on this single track; with each refrain of, "Peace, be still," there is this beautiful reminder of Jesus' sovereignty over everything. Overall, the album took some time to fully process, but once it reached a point of understanding, it made a solid landing. If you've loved Andrew Peterson's previous work, you'll more than likely be pleased. If you are a newcomer to Peterson's art, this might be a wonderful introduction. You'll not only find his music relatable, you'll hear that his personal stories might sound like yours. - Review date: 10/8/15, written by Ryan Barbee of Jesusfreakhideout.com