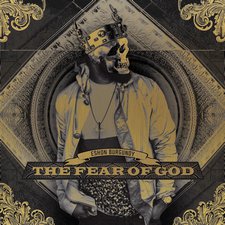 Eshon Burgundy
The Fear of God


Humble Beast has been a breeding ground for highly talented and innovative rappers and hip-hop artists in recent years. Eshon Burgundy is definitely no exception to that rule. His label debut mix-tape, For God's Sake, was good, but his newest album has him stepping up his game. The Fear of God circles around the same central theme as the title of the album and focuses on different scriptures, such as Proverbs 1:7 and Romans 3:18 -- each referenced in "The Fear of the Lord (Interlude)." Eshon brings a powerful and relevant message to today's culture and sets it all to a pretty stellar soundtrack.

The album starts with the title track and Eshon rapping over a soft piano. When the beat finally kicks in, you can begin to feel his passion for the subject matter. Eshon continues rapping on fear as he drops some heavy knowledge on "The Healthy." One of the best tracks on the album comes up next in "Blood Money." The term has a particularly negative connotation, but Eshon is rapping about how Christ's blood paid for everything. "Will somebody kindly remind them that I'm soakin' in that Blood money, blood money, blood money, money. Paid for it all in blood; that's the price of love," turns something thought of as negative into the greatest positive the world has ever known. While the lyrics to "Blood Money" are powerful, those in "Control Issues" are a bit more on the clever side. The song is about giving God control of your life and Eshon spits, "Went from those who snorted powder to bangin' that David Crowder; Oh, how He love us." A couple of spots later is the aforementioned "The Fear of the Lord (Interlude)." This is one of the most simple, yet profound, interludes I've personally ever heard. Eshon speaks practically and clearly about the fear of the Lord. Eshon says, "In this sin-infected world that we live in, the fear of the Lord is the exception; not the rule." He goes on to show that the evil in the world is because people don't fear the Lord, and backs it all up with scripture. Eshon does more than point out the problem; he offers the solution of Jesus as well.

As a whole, the album comes down a notch after the most prominent moment in the spoken word interlude. There aren't any particularly weak songs, but nothing really reaches the level of the first half. "Sand Castles," however, changes things up nicely with a beat that's not coming at you with the typical 4/4 hip-hop time signature and tempo. "Good Grief" also stands out with another weighty message. Eshon takes the perspective of a soldier struggling to adjust upon coming home. The Fear of God finally closes out with "A Close Distance." Eshon raps about God's omnipotence and omnipresence. In the chorus Eshon raps, "I can't put You in a box. Why would I try? I ain't got enough words in my stash to describe. I'm just down here on the earth looking up at the sky observin' the distance that exists between You and I. How are You so high and so low? Down here with me, yet You're light years beyond the globe. They must turn around 'cause they don't know. How do you turn your back on something that beautiful?"

The Fear of God is a crowning achievement in Eshon Burgundy's still young career, and another great album from the Humble Beast family. The label has a heart for God and spreading his word and is able to seek out and sign like-minded artists on the regular. Eshon's love for God and passion for a lost and dying world is evident. The Fear of God points out the glaring and obvious cause for the hatred and violence in the world today. It's so simple yet those that don't know Christ refuse to see that as the true problem. If you like big and banging beats, you aren't going to get that from Eshon Burgundy. If you just like great hip-hop with deep lyrics and some added musicality, this album is most definitely for you. As it stands currently, Eshon Burgundy's The Fear of God is 2015's top hip-hop album to date. If you missed the record when it was released, head over to Humble Beast and get it immediately. I don't foresee any disappointment coming your way in doing so.