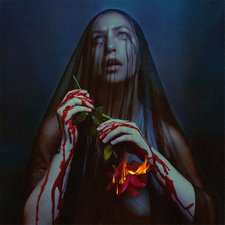 Fit for a King
The Hell We Create


Since their 2013 breakthrough, 2013's Creation/Destruction, Fit for a King have been one of the more consistently spectacular metalcore bands. They have managed to defy the stagnation that seemed so pervasive in the overall genre with their technical prowess and their ability to not only shatter one's ear drum with a brutal breakdown, but also a strong sense of melody. 2020's The Path saw the band stretching their artistic boundaries, with mixed results, with the addition of electronic elements, and in The Hell we Create, we find something that feels like natural progression.

From the opening of the title track, it is apparent that Dan Gailey's influence as the lead guitar player has played a significant role on curating the technical ferocity of FFAK's attack. His fiery guitar prowess have found the perfect meshing with Bobby Lynge's and this drives a majority of the record. The cinematic keyboards and electronic elements that popped up in The Path still feature quite heavily as well in songs like "The Reaper," "Eyes Roll Back" and epic album closer "What You Left Behind." Ryan Kirby continues perfecting the artform that comes with being a metalcore singer, as not only do his screams sound as good as ever, but he also shows his range delving from typical hardcore/metalcore style ferocity into deathcore roars and shrieks like those found in "The Reaper." Most impressively, he continues to evolve by showing his clean singing chops as well, highlighted in the masterful "Falling Through the Sky."

Lyrically, the band has stepped away from the bold declarations found on The Path and walks back into some darker material. The second track, and second single, was written as a response to Kirby's wife having a stroke and his being totally unprepared to handle the passing of someone so close to him. The lyrics touch on the darkness that we are lost in during these times, "My darkest days are screaming in my face Who can I blame? 'Cause I can't do this alone God don't let her go It's on your face, you're an ocean with no waves There's no words left to pray." The theme that death comes for us all is peppered throughout the rest of the album as well (such as "Fate, I can't escape the decay" from "The Reaper" and "In silence I dig my own grave" from "Eyes Roll Back," which is probably the heaviest track as well). This is not to say that there are not moments of hope found here; the perfect example is the profound "Reaching Out" ("I know it can get easier/ dealing with the pain"). The album also showcases a great feature on "Times Like This," with Johathan Vigil of The Ghost Inside, a song which tackles the current social climate of letting our bias guide us into believing false information and the unreliability of the news cycle.

As with most metalcore there are drawbacks. As mentioned before, The Hell we Create feels like a natural progression stylistically from The Path. For some, this will be a good thing, but for others, it may become stale after a few listens due to the lack of any true variance from the winning formula that has kept FFAK at the top of the game for so long. This, for me, was a fun listen and one that will have multiple tracks that will stay in rotation. For many, this could potentially be an Album of the Year candidate. I appreciate the personal honesty and the way that some very heavy subject matter was handled; we could all learn the lesson that death comes for us all, and the challenge to take stock in our life and see that we have a choice to live a life with an eye towards hope or despair. It's a reminder that it can be the most important decision we will ever make in our lives.

In terms of new music, Fit For A King may be the most consistent band on Solid State's roster. Since their label debut in 2012, the band has put out a new album every two years, including 2022's The Hell We Create. In terms of quality, though, the same consistency isn't applied. While albums like Slave To Nothing and Dark Skies showcase the best the band has to offer, Deathgrip and The Path offer the exact opposite. The Hell We Create falls in between the two extremes, though it's definitely closer to their better work. The single "Times Like This" sounds made for rock radio, but it's nonetheless highly enjoyable, and the deathcore elements throughout the album are surprising and work very well for the band. I'd really like to hear them lean further into this - heck, if they wanted to go full-on deathcore, I'd be down. That being said, I wanted to commend the final three tracks; they move away from the super heavy in favor of a more nu metal / hard rock sound, much like something you'd hear from Hybrid Theory-era Linkin Park. While I was ready to write them off on first listen, repeat listens were much more favorable, ending on a note I didn't fully expect, but I'm pleased with regardless. If you find Fit For A King to be a hit-and-miss band in regards to your personal taste, hopefully you'll keep being like me long enough to find something to enjoy in The Hell We Create. - Review date: 10/17/22, Scott Fryberger of Jesusfreakhideout.com